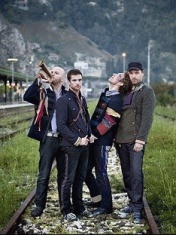 
Coldplay members Chris Martin and Johnny Buckland met at University College London in 1996 and immediately decided they would start a band. The current line-up was formed by 1997, when two more students of the same college, Berryman and Champion, joined the duo (the latter first played the guitar and piano, but, if necessary, retrained as a drummer). The first demo releases appeared already in 1998 (Safety EP) and 1999 (Brothers and Sister EP). This was followed by the signing of a five-album deal with Parlophone and the release of The Blue Room EP, during the recording of which Martin kicked Johnny Champion out of the band, and then begged him to come back and started drinking to celebrate. As a result of internal conflicts, the group developed a code of conduct based on democratic principles; in it, in particular, it was written that the profits from the recordings would be divided equally, and anyone who was noticed using hard drugs would have to leave the ensemble.

In 1999, Coldplay began work on the album, and in 2000 they went on their first tour and released the single Yellow, which made the group famous in Europe, so that by the time the first album Parachutes (2000) was released, they already had numerous fans. The group quickly "conquered" Europe; despite a more modest success in America, the first album there eventually went double platinum, and in 2002 received a Grammy as the best alternative album.

2002 saw the release of A Rush of Blood to the Head, which included hits such as In My Place, Clocks and The Scientist. The album also received a Grammy for Best Alternative Recording. From 2002 to 2003, the band was on a world tour, covering five continents; a live DVD was released as a result of the tour, and at the end of 2003 Coldplay readers recognized Coldplay as the "Band of the Year".

In 2004, the group rested on their laurels and recorded their next album, X&Y, which was released in 2005. Despite the fact that X&Y became the best-selling album of the year and debuted at number one in the charts of 20 countries, critics and fans received the record more coolly than with previous records of the group. In 2005-2006 Coldplay embarked on a worldwide tour under the Twisted Logic Tour.

The most recent and successful album to date remains Viva La Vida, or Death and All His Friends (2008), produced by Brian Eno. Chris Martin said that the previous albums were a "trilogy", and Viva La Vida begins a new stage in the musical creativity of the ensemble - for example, on this recording Chris began to sing less in falsetto and use more of the lower register of his voice. When the album came out, it became one of the fastest-selling records in the history of British music, as well as a record number of downloads on the internet. The album and songs from it received three Grammys in 2009. Since April 2009 the band has been recording a new album, which will again be produced by Brian Eno.

A Sky Full Of Stars

04:10
Every Teardrop Is a Waterfall

02:56
Have Yourself a Merry Little Christmas