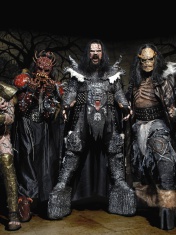 Lordi is a Finnish English-speaking band. Founded in 1996 by Tomi Putaansuu (aka Mr. Lordi). The group is famous for performing in masks and monster costumes and performing ironic horror-themed songs.


Tomi Putaansuu, a musician and chairman of the fan club of the hard rock band Kiss, decided, inspired by his idols, to create a musical group. He came up with the concept of Lordi in 1992, and in 1993 he recorded a solo demo album Napalm Market, which was never released. In 1996-1997, the first line-up of the group was formed: Mr. Lordi (vocals), Amen (guitar), G-Stealer (bass) and Enary (keyboards). Following the example of Kiss, all the members of the new group adopted pseudonyms, and the first stage costumes were also designed. Putaansuu himself became known as Mister Lordi.

In 1997, their debut album Bend Over and Pray the Lord was due to be released, but the release did not take place because their label went bankrupt shortly before the planned release date of the album. After the recording, G-Stealer left the band and Magnum became the band's new bassist, and in 2000 Kita became the band's first drummer.
Get Heavy's debut album was released in 2002 on Halloween night - November 1. The album cover is depicted based on Kiss's Love Gun. The lyrics of the album were dedicated to "horror films" - monsters, vampires, demons, as well as the praise of rock music. The songs "Devil is a Loser" and "Would You Love a Monsterman?" from this album became the first hits of the group. They were released as singles, videos were shot on them. Get Heavy won the 2003 Emma Galla competition, becoming Finland's best metal album of the year. After the recording of the album, the band members asked Magnum to leave the band, the motive for the dismissal was the low level of playing the bass guitar, Kalma became the third bassist.

The first Lordi concert was held on December 8, 2002 in Helsinki, a video of the concert was released on DVD on the compilation Scarchives vol. 1 in 2012. In April 2003, the band undertook the "Wacken Road Show" tour. The group's fame grew and it helped the group to sign a contract with the German record company Drakkar.

Lordi was promoted by the renowned producer Hiili Hiilesmaa, who had previously worked with the bands HIM, Amorphis and Sentenced. Under his leadership, The Monsterican Dream was released, which had a heavier sound than the previous one and contained darker themes in the lyrics. The songs "My Heaven Is Your Hell" and "Blood Red Sandman" were released singles, the latter became one of the most popular songs of the group and from that moment was performed at all Lordi concerts. However, the album had less commercial success than Get Heavy. Wearing new costumes, the band starred in the short film "The Kin", which was released on DVD in a special edition of the album. In 2005, the band combined the best songs from the first two albums into the compilation "The Monster Show" for sale in the UK. After that, the band underwent further line-up changes: new keyboardist Awa and bassist OX came, who replaced Kalma a few days before the group was invited to Eurovision.

In 2005, Mr. Lordi received a call from the Finnish selection committee for Eurovision and was asked to choose two songs from the new album that could represent Finland in the competition. The band chose the songs Bringing Back the Balls to Rock and Hard Rock Hallelujah, the latter being voted for by the majority of Finnish TV viewers in the semifinals. Lordi changed the arrangement, cutting the song from four minutes to three, as prescribed by the competition format. In the final of the qualifying competition, Lordi successfully won the audience vote and were selected by Finland's representatives for Eurovision. For the first time in history, Finland, a country with a rich tradition of rock music, was represented by a rock band (Nightwish also won the audience vote in 2000, but was rejected by the committee). However, Lordi's election caused a scandal. Some NGOs have called the group "Satanic" for its image and lyrics. In addition, Lordi had financial problems with the delivery of expensive equipment and pyrotechnics to Greece, where the competition was taking place. Thanks to the help of sponsors, this problem has been resolved.

Lordi passed the semi-finals of the competition and made it to the finals. The performance of the musicians was accompanied by a bright pyrotechnic show, and the famous rock singer Pasi Rantanen performed the backing vocals of the band in the mask of Gene Simmons. Hard Rock Hallelujah won the audience vote, beating Russian member Dima Bilan and Bosnia and Herzegovina's Hari Mata Hari, and with 292 points, a record in Eurovision history until the 2006 judging system change, Lordi took first place in the competition. The victory in the competition brought the group more widespread fame. Album The Arockalypse topped the charts in Finland, Sweden and Greece. Hard Rock Hallelujah was released as a separate single and two versions of the video were filmed for it.

The President and Prime Minister of Finland personally congratulated the group on their victory at Eurovision. In May 2006, a grandiose solo open air took place in Helsinki, attracting 90,000 people and becoming the largest public event ever organized in the capital of the northern country. And "Hard Rock Hallelujah" took another height: performed in a karaoke version, this song united about 80,000 voices, thus the world record set by Irish rugby fans (50,000 votes) was broken by fans of the Finnish "monsters". Continuing the series of praises, Rovaniemi's central square was renamed after Lordi.

After winning the competition, Lordi conducted the "Bringing Back the Balls to Europe" tour, visiting Moscow as well. During one of the performances (namely on October 31 in London), a former bass player, Kalma, appeared on the stage. The group increasingly appeared on various TV shows in many European countries, as well as in the United States. In November 2006, the group was nominated for the MTV Europe Music Awards, and Mr. Lordi presented the awards to the winners. In 2007, Lordi performed at the Download and Ozzfest festivals, in 2008 at the Wacken Open Air, and in the summer of 2007 starred in the horror film Dark Floors. The film's soundtrack is the single "Beast Loose in Paradise".

On May 7, 2008, the band began working on their fourth album. For the new album, the group had 60 songs, of which the group chose 13. All the members of the group took part in writing the songs of the album. "Deadache" was released on October 23rd. The album had less commercial success than The Arockalypse. The cover of the single "Bite It Like a Bulldog" features Mr. Lordi's bulldog. At the end of the year Lordi toured "Deadache USA" and in 2009 they toured Deadache Europe. On February 20, the band released their second compilation album, "Zombilation - The Greatest Cuts", which includes the best songs from the first four albums. It was recorded on the "Drakkar" label, after which the band did not renew the contract with him, finally moving to Sony Music.

The fifth album was released on October 18, 2010. The single "This Is Heavy Metal", released on August 16, was the soundtrack for the Saw 3D movie. In October 2010, drummer Kita announced his departure from the group, out of a desire to perform under his own name in the group Stala & SO. Lordi's new drummer was Otus, but on February 15, 2012, the band sadly announced his passing. In August 2012, a letter from Ava appeared on the Lordi's official website, in which the keyboardist announced that she was leaving the group. On August 11 in Rovaniemi, on the day of the band's twentieth anniversary, the last concert with the participation of Ava took place.

On September 3rd, a limited edition of Scarchives vol. 1 - a compilation containing songs from the demo album Bend Over and Pray the Lord, a video of the first concert, and other rare materials.

On December 17, 2012, keyboardist Hella and drummer Mana were introduced. The real names of the musicians are unknown.

On March 1, 2013, the sixth studio album, To Beast or Not to Beast (an interpretation of Shakespeare's "to be or not to be"), was released.

Costumes and masks are the main feature of the group. They are made of latex and hand-painted by Mr. Lordi. Before each concert, the musicians make up for over an hour. Each image created by the musicians is unique. In the event of a change in the composition, the new member does not inherit the old image, but receives a new alias and a new mask. In addition, on the occasion of the release of the new album, the band members always have their costume designs updated. The sources of Lordi's image are such American glam metal bands as Kiss, Alice Cooper, Twisted Sister and others.

The band's concerts are accompanied by vibrant pyrotechnic shows and many theatrical elements. During the performances, the participants use chainsaws, swords, skulls, zombies and monsters appear on the stage. During the performance of "Devil Is a Loser", Mr. Lordy "grows" huge wings on his back. A two-headed ax is also an integral part of the frontman.

Lordi's music is mainly hard rock with elements of classic heavy metal. Since the group combines heavy music, masks and costumes in the style of horror, then the genre of the group can be called shock rock, although it is not a musical direction. Musically, the band sounds like Kiss, Twisted Sister, Accept and UDO

Devil is a loser
Comments