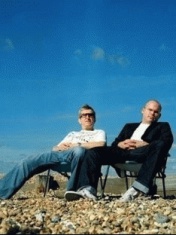 According to legend, the dance duo of two producers - Russel Small and James Wiltshire - borrowed its name from a favorite pub, which is located not far from their studio. It was in this town of Brighton, in East Essex (England), that the history of this production duo began, famous for its collaboration with Kylie & Dannii Minogue, Beyonce & Solange Knowles, Sophie Ellis- Bextor (Sophie Ellis-Bextor), and dance music guru Norman Cook (Norman Cook) aka Fat Boy Slim. It is also worth noting that Russell knew almost from childhood that he would be a DJ: from the age of 13 he helped his father in the musical design of wedding ceremonies, and as soon as he reached a more or less decent age, he plunged headlong into the club life of his hometown and surroundings.

The starting point for Freemasons' active activity was 2005. Although even before this date, the musicians were famous in dance circles. Russell was part of the duo Fats & Small, and James worked with the same duo under the pseudonym Jimmy Gomez. Before starting their own label and production company, the couple managed to remix them under the pseudonyms Alibi, Walken, Funk Fanatics, and BN3. In general, even before the formal merger, they were doing quite well.

But it was under their own name that their most important successes came to the duo. The very first collaboration of the producer duo - the track "Love On My Mind" with samples from Jackie Moore's song "This Time Baby" and Tina Turner's hit "When Heartache Is Over" - debuted on the first line of the hit Parade Billboard Hot Dance Club Play and climbed to # 11 on the UK dance charts. Thus, Russell and James' friendship was strengthened by serious professional achievements.

Having made such a serious claim to leadership, the duo continued to cement their positions as producers. They remixed Faith Evans's hits "Mesmerized", Beyonce's "Deja Vu", with whom they even earned a Grammy nomination, her sister Solange's song "I Decided" and the hit "Work" by Kelly Rowland - and each time they achieved high places in charts. Together with Richard Stannard, they released a remake of the single "One" from the album "X" of major Australian pop star Kylie Minogue. And for Beyoncé they did a couple more remixes of "Ring the Alarm" and "Beautiful Liar", recorded as a duet with Shakira. Norman Cook himself entrusted them with the rework of his famous anthem "Right Here Right Now", and the winner of the show "X Factor" 2008 Alexandra Burke (Alexandra Burke) invited them to work on her debut album "Overcome" (2009).

Russell and James, however, did not forget about themselves either. In 2007, they released two studio albums at once. The double "Shakedown" included 28 remakes, including their famous remix on Beyoncé, and "Unmixed" - 12 original tracks with guest vocalists, most of which were sung by Amanda Wilson. In 2009, the album "Shakedown 2" was released, traditionally composed of remixes. This time the disc includes such artists as Solange Knowles, Jamirouiai, Moby, Bob Sinclar and others. But the most important work of the duo in 2009 was the joint hit with Sophie Ellis-Bextor "Heartbreak (Make me a dancer)", the video for which has long settled on the world's leading music channels. Probably, it will be the main pearl of the new Freemasons album "Unmixed 2", which the band promises