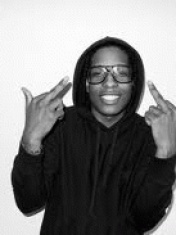 Rakim Myers was born on October 3, 1988 in Harlem. In part, his fate was already determined, because he was named after the rapper Rakim. Actually, he started rapping at the age of 8. Despite the tragic circumstances of his childhood, Rakim did not go to prison, was not killed, in general, did not repeat the fate of his father and brother. He was seriously engaged in music, and already in 2007 Rakim joined the ASAP collective, after which he became

Starting a solo career, in August 2007 he released the single "Peso", which a few weeks later entered the playlist of the largest radio station in New York. The popularity of the rapper was facilitated by the videos he released for the songs "Peso" and "Purple Swag", it is thanks to these videos that A $ AP Rocky signs a contract with Sony / RCA.

In September 2012, his debut album "LongLiveA $ AP" is expected to be released, in April 2012 the premiere of the first single from this disc, "Goldie", took place.