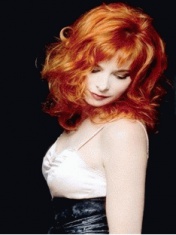 This red-haired woman is a real sorceress: she can turn into a naive child, or into a mysterious vamp lady, or into a stylish lady of high society, or even simply into an unearthly creature, into an angel, into a goddess. The unique, inimitable Mylene Farmer is a true Frenchwoman, whose taste has remained impeccable over the years of her successful career.

Initially, Mylene was spoken of as another production project - composer, director and pianist Laurent Boutonnat noticed a young girl with a memorable high-pitched voice, and was actively pursuing a singing career. Mylene chose the pseudonym Farmer in honor of her beloved actress Frances Farmer, and the craving for cinema was reflected in her career - in addition to memorable songs, Butonna staked on visuals: each Mylene clip became a kind of mini-film, a little story - and the video for the song “Pourvu Qu 'elles Soient Douce' has grown to a nearly half-hour short with clear erotic overtones. And such a combination - passion, sensuality, femininity on the verge of mysticism - the image of Farmer as an unearthly woman, a foreign creature of a higher order, made the singer beloved outside her native France, despite the fact that Mylène continued to sing in unchanged French.

In 1994, Mylene and Laurent had a discord: on the set of the film "Giorgino", directed by Boutonna, Mylene met actor Jeff Dahlgren (Jeff Dahlgren). The imposing handsome man won Mylene's heart so much that she decided to include him in the accompanying stage group (Jeff played the guitar), but the love affair did not stop the creative union of Mylene and Laurent - they still wrote songs together.

Together with Jeff Mylene, she assembled one of the most powerful European backing bands on stage, which included guitarist Brian Ray and virtuoso drummer Abe Laboriel-Jr, now performing with Paul McCartney himself. ... Brilliantly staged, filled with wonderful visual images, Mylene Farmer's shows have become some of the most striking European concerts.

After the 1999 album "Innamoramento", Milen took a creative break, during which, together with Laurent, she produced the singer Alizee, voiced Luc Besson's cartoon "Arthur and the Miniputes" - and prepared a new album. Dubbed 'Avant Que L'Ombre', it was released in 2005 and, along with the main provocative hit 'Fuck Them All', exploded the European charts. The colorful stadium shows have resumed, bringing Mylene to the public in perfect physical and vocal form.

The next album, Point De Suture, solidified the success of its predecessor and demonstrated that even at 48, Milen is capable of delivering a high-quality musical product and a great show. This show can be heard on the last live album - Milen's fifth live album, released in 2009, called, without hesitation, "No. 5 On Tour" gained popularity in Europe immediately after its release.

She still fascinates and conquers the audience: a diva, a sorceress, a goddess, an unearthly creature. She is still lonely - she and Boutonn never had children, and while away the loneliness with their pets - the tame monkeys Milen even starred with her in the video “Optimistique-Moi” - but she has not yet received the long-awaited family warmth. As Mylene herself admits, Laurent is not her husband, but only a faithful friend and partner, but the closest being - a Capuchin monkey named E.T. But, who knows, maybe Mylene will change her mind and the main female happiness is still ahead of her?