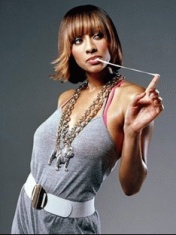 
Keri Hilson was born in 1982 in Georgia. In her youth, Keri studied vocals and piano, and while in college, she already participated in her first ensemble. In parallel with her musical activities, Keri received her higher education at the university, specializing in the history of theater. In the early 2000s, Carey began writing songs for famous artists - her compositions were performed by Britney Spears, Ciara, Usher and others.

In 2006, Carey signed as a solo artist to Mosley Music Group, Timbaland's label. By this time, Hilson had already appeared several times as a vocalist on the recordings of P. Diddy and Lloyd Banks, and in 2007 she took part in the recording of Timbaland's album "Shock Value". However, Keri herself was eager to record a solo album.

The debut recording was not easy for Keri: after a series of delays, the album "In a Perfect World ..." was released only in March 2009. The record immediately soared to the 4th place in the Billboard Top 200 and the first place in the hip-hop chart and r & b albums. In 2010 the album was reissued for the European market. In the meantime, Keri continued to record and perform with colleagues in the hip-hop industry - Usher, Lil Wayne, Chris Brown and others. Hilson is currently working on his second album, which will again be produced by Timbaland.
Смотреть все