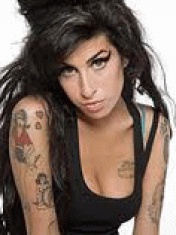 Amy Winehouse is a recognized singer who went down in history as an amazing performer and record holder: she is listed in the Guinness Book of Records because she is the first and only British singer to receive five Grammy awards.

She was born on September 14, 1983 in London. Her parents were descendants of Jews who immigrated from the Russian Empire. It was the family who instilled in her a love for music, in particular - for jazz. She began writing her songs at the age of 14, it was at this age that she tried drugs.

She soon signs her first contract with EMI. However, her debut album was released only in 2003. "Frank" goes platinum, and Amy receives British Female Solo Artist and British Urban Act awards. Almost all the songs on the album were written by a young talented performer.

In 2007, Amy's second album, Back to Black, was released, which went platinum five times in England, and as a result was named the best-selling album of that year. Winehouse is waiting for recognition, numerous awards and love of the audience.

However, more and more reports appear in the press that the singer uses hard drugs, without even hiding it.

At the end of 2007, the DVD "I Told You I Was Trouble: Live in London" was released (a concert at the Shepherds Bush Empire in London with a documentary). And in the same year the last single from the 2007 album "Love Is a Losing Game" was released.

Amy has collaborated with many performers.

Amy Winehouse has been to Russia only once - she took part in the opening of the Garage Center for Contemporary Culture in Moscow in 2008.

03:14
Tears Dry On Their Own
Comments