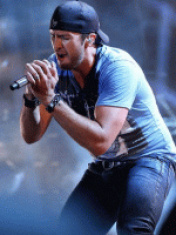 Luke Bryan real name Thomas Luther "Luke" Bryan (born Luke Bryan, born July 17, 1976) is an American country singer and songwriter. Brian worked as a composer before releasing his debut album in 2007. His debut single, "All My Friends Say", peaked at number five on the Billboard Country Charts and since then several of his singles have climbed to the top of the charts and received gold and platinum certifications from the Recording Industry Association of America. His third album, Tailgates & Tanlines, released in 2011, was certified platinum, and in 2012, Brian received an American Music Award for Best Country Artist.

I Don't Want This Night To End

That's My Kind Of Night

She Get Me High
Comments