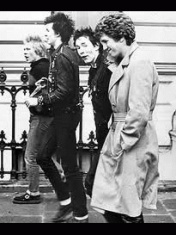 The Sex Pistols is an iconic British punk rock band that has inspired many bands. It was actually formed from the young musicians "The Strand", which have existed since 1972. The band was composed of vocalist Steve Jones, drummer Paul Cook and guitarist Wally Nightingale. In 1974, Malcolm McLaren, the owner of a rocker and biker clothing store, became their "producer".

A year later, nineteen-year-old John Lydon (Johnny Rotten) became the vocalist, who did not fall into the notes at all, but had a remarkable appearance. The group came up with the name "Sex Pistols" in 1975, and then they had their first performance. However, quite unfortunate.

However, the band was gaining experience in performing and could already gather about 600 people, and also began writing songs: in the summer of 1976, the Sex Pistols' performance was broadcast for the first time on television with their song Anarchy in the UK.

Then the group signed a contract with EMI, and they released the single "Anarchy in the UK", which immediately became popular (ranked 38th on the UK Singles Chart), but could not be released on radio and TV.

In 1977, Sid Vicious joined the group, the band released the single “God Save the Queen”, and the musicians were constantly attacked and involved in riots. In the same year, their debut album, Never Mind the Bollocks, Here's the Sex Pistols, was released. At the end of the year, the group went on tour in England and Holland, and in 1978 they went on a tour of the cities of the United States.

After a disastrous tour in America, Johnny Rotten leaves the group. The Sex Pistols disbanded.

However, they sometimes played almost as a whole. In 1996, the band gave many concerts around the world, and also released the disc "Filthy Lucre Live".

In 2002, the musicians again released "God Save the Queen" and give concerts in honor of this single, which "turned" 25 years old.

In 2003 the band toured North America.

The band then played together in 2007 on the occasion of the 30th anniversary of the release of the album Never Mind the Bollocks, Here's the Sex Pistols. In 2008, the musicians go on a large-scale tour, visiting Russia for the first time, and also release the DVD "Let there always be England".