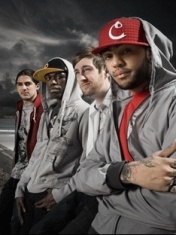 
Gym Class Heroes was officially formed in 1997 and initially consisted of MC Travis McCoy and drummer Matt McGinley. Friends practiced their technique at numerous friendships, clubs and festivals, but the real birth of the ensemble took place in 2001 when guitarist Milo Bonacci and bassist Ryan Giese joined the group. The guys became famous for their participation in the Warped Tour - a series of concerts in North America, combined with competitions in extreme sports. Popular in these youth circles, the mixture of hip-hop, rock and R&B performed by Gym Class Heroes has been noticed by a number of producers, in particular Patrick Stump and Pete Wentz of Fall Out Boy. Pete produced The Papercut Chronicles (2005) and signed the musicians to his label Decaydance - but the lineup changed during the work on the album - Disashi Lumumba-Kasongo became guitarist, and Eric Roberts replaced bassist.

Band leader Travis McCoy is also known for winning the MTV-sponsored hip-hop Direct Effect MC Battle, and this is largely due to the fact that the band is keeping up with the hip-hop wave - for example, on the latest album The Quilt (2008) as “guests »Lil 'Wayne and Busta Rhymes lit up