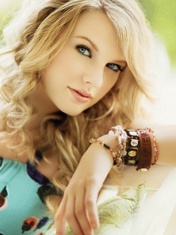 Today, the name of the young singer Taylor Swift is known not only in the United States of America, but throughout the world. The songs she sings in the pop country style are written by Taylor herself or in collaboration with other poets and composers. Already the first album, released in 2006, made the charming sixteen-year-old girl with outstanding vocal abilities extremely popular both among young people and among more mature fans of country music.

Taylor Swift was born on December 13, 1989 in Wyomissing, Pennsylvania, the son of a stock broker and a housewife. The girl grew up very artistic - she wrote poetry, participated in children's music competitions and festivals, played in amateur theatrical performances and proved herself as a good comedic actress. At the age of ten, she began writing songs, and at the age of twelve - playing the guitar. Grandma Taylor was a professional opera singer and performed on stage in theaters in Singapore, Puerto Rico, Vietnam and the United States. She sang, for example, in the opera The Barber of Seville, in the musical West Side Story. Since childhood, Taylor admired her beautiful stage black-and-white photographs, but she preferred music, and country music, rather than theater.

Parents encouraged and promoted their talented daughter in every possible way. They made studio demos of her karaoke songs and made a special trip to Nashville to interest the music industry professionals who could release an album of Taylor's songs. The parents realized that in Nashville the girl had a better chance of making a career and fulfilling her dream, and when Taylor was fourteen years old, the family settled in the suburbs of this city. By this time, the girl was already known in musical circles. She sang the US national anthem several times. Everywhere, at the US Open Tennis Championships or at the 76th Philadelphia Games, the thousands-strong stadium froze and silence fell. And in this silence, Taylor Swift's beautiful and clear voice sounded. Subsequently, as the singer herself says, she had to sing the national anthem a hundred times, even at a meeting of the gardening club.

Gradually, Swift developed useful contacts and new acquaintances. She began performing in cafes and restaurants and began receiving offers from other songwriters to collaborate on songs. At the same time, the girl tried to release an album, but her songs did not arouse interest even among local recording studios, not to mention large and well-known companies. Once the performance of a gifted singer was accidentally seen by Scott Borkett, who has extensive experience in show business. He signed a contract with Taylor to release a single, which appeared in August 2006. Tim McGraw's debut single was then featured on the Taylor Swift album, released on October 4, 2006. It includes four songs written by Taylor herself or with co-authors who made her really popular. These are songs about love, about unrequited love, i.e. about the feelings that excite every young girl. Thanks to their melodic and expressiveness, the songs Teardrops on My Guitar, Our Song, Picture to Burn and Should've Said No I Said No ”) hit the Top 40 on the Billboard Hot 100. This debut album sold 1.6 million copies in a year.

In the fall of 2007, Taylor Swift released the Christmas album "Sounds of the Season: The Taylor Swift Holiday Collection", which was not as popular as the first. But her next studio album, "Fearless", released on November 11, 2008, made a splash (it sold over 3 million copies of the album) and won the CrystalMilestone Award for the largest circulation. At the ACM-2009 music ceremony, Taylor received two awards in the Album of the Year category as a performer and co-producer. Currently, Taylor Swift is successfully conquering the musical Olympus. Together with her seven musicians, who call themselves "Agency", she performs on television, shoots video clips for her songs, gives concerts at various music venues. She hasn't forgotten her acting skills, starring in Hannah Montana as a woman singing in a bar. Taylor's photographs can be seen on the covers of glossy and teen magazines. In 2008, she took 57th place in the list of the sexiest women according to the magazine "Maxim". She is involved in charity work, donating huge sums to the Red Cross and other organizations. And this is just the beginning of her journey!

04:16
В избранное Новый плейлист
Клип Taylor Swift - Look What You Made Me Do

05:10
1
Back To December
Вернуться в декабрь

03:17
We Are Never Ever Getting Back Together

10
I Knew You Were Trouble

03:37
2
We Are Never Ever Getting Back Together
Все видеоклипы Taylor Swift (145)

03:05
Christmases When You Were Mine

03:53
Christmas Must Be Something More