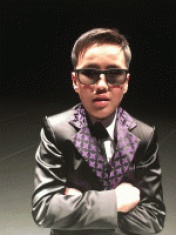 He became famous for his song "Strong is not the one who hits". From an early age he became interested in music, having independently mastered playing the synthesizer. With the support of the composer and arranger Alaguy Egorov, he began to perform songs in the style of ethno-pop, R&B, disco. Having equipped a home recording studio "Ludochi", he began to record songs of his own composition, published several author's collections. Despite his limited vision, he is actively involved in creative and concert activities.