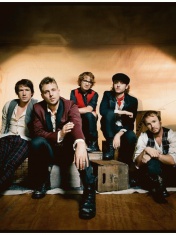 The group was founded in 2002 in Colorado Springs by vocalist Ryan Tedder and his high school friend Zach Filkins, who played guitar. The group was originally called Republic. The band soon moved to Los Angeles and were supplemented by keyboardist Drew Brown, bassist Tim Myers and drummer Eddie Fisher. After signing a contract with Columbia Records in 2003, the group began work on their debut album. The name was changed to OneRepublic, as the previous name was already used by other bands. In parallel, Ryan Tedder worked for the renowned producer Timbaland, wrote songs for various artists, participated in the work on Paul Oakenfold's Grammy-nominated album A Lively Mind.
After two and a half years of work on the album and just two months before its planned release, Columbia Records decided to terminate its contract with OneRepublic. At that time, the group was rapidly gaining popularity on MySpace, due to which the musicians signed a contract with the Timbaland label Mosley Music group, becoming the first rock group to work with this label. In 2007, Tim Myers left the band and was replaced by Brent Katzl.
In April 2007 Timbaland's album "Shock Value" was released, which contained a remix of Ryan Tedder's song "Apologize". The single with the remix was very popular and went three times platinum in the United States, and the total number of copies sold worldwide reached five million. "Apologize" spent eight weeks at the top of the American Pop 100 charts and reached number two on the Hot 100 singles chart, and the song was also featured on the soundtrack of the German comedy "Handsome". On November 20, 2007, the band's debut album "Dreaming Out Loud" was released, which quickly went gold. Following their first success, OneRepublic performed on television, including performing their song "Apologize" with David Archuleta in the American Idol finale, and embarking on a 2008 concert tour with Maroon 5 and Brandy Carlisle.
On September 24, 2008, during a concert in London, the band announced work on a new album for a summer 2009 release. The second album, Waking Up, was being worked on in Denver. Its release took place with some delay on November 17, 2009. "Waking Up" peaked at number 21 on the Billboard 200. Also in 2009, the band recorded the song "Lost Then Found" with Leona Lewis for her second album "Echo". The song from the Waking Up album, Secrets, was used in The Sorcerer's Apprentice, but was not featured on the official soundtrack, and it is also featured in Pretty Boy 2. The song Good Life was used in the film "Excellent student of easy virtue" and also in the film "One Day". The song Stop and Stare appeared at the end of the pilot episode of the first season of Castle.