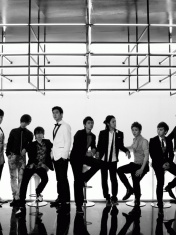 Since the late 90s, talent scouting agency and record company SM Entertainment have held annual auditions looking for new talent to replicate and multiply the success of pop groups such as HOT, SES, and Shinhwa, also formed by SM Entertainment founder Lee Soo Man in mid-1990s. The first members of the new group were Leeteuk and Eunhyuk, who auditioned in 2000.
In 2001, the company held its first overseas selection in Beijing, and Hangyeon was selected from 3,000 applicants. In the same year, Yesung, Sungmin, and Donghae auditioned. A year later, they were joined by Heechul, Kanin and Kibum, who were screening in Los Angeles. Siwon auditioned in 2003, Ryouka was accepted in 2004 after participating in a music festival. In 2005, Shindong was selected.

On May 23, 2006, the thirteenth member Kyuhyun was added to the group, who was selected in a 2005 singing competition. They released the single "U" for online download on May 25, 2006 on their official website. After 5 hours, 400,000 downloads were counted, and this figure was constantly growing, eventually reaching a crazy 1.7 million downloads, which led to the site crashing.

Sujou collected 7 prizes at 5 different music awards in South Korea, and the year ended with being voted "Best New Group".

The members were engaged in solo projects, and at the end of 2006 the group ended their musical activities, with the exception of Super Junior - KRY, the first official subgroup. The second subgroup appeared in February 2007 under the name Super Junior-T.

Due to the vigorous activity deployed by SuJu M in China, the composition of the main group was missing five members, and so that they would not be forgotten at home, a fourth subgroup was created in the same year. 5 members from the already famous Suju T (Shindong, Sungmin, Kanin, Leeteuk, Eunhyuk) and Yesung gathered in Super Junior Happy and released their first single, "Cooking? Cooking!" July 5, 2008, whose promotion ended on September 7. In November 2008, SuJu T returned under the name Super Junior - T x Moeyan, merging with a group of two popular Japanese comedians.