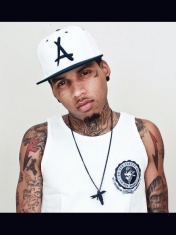 He then released the Daydreamer mixtape which was available for download, and another mixtape titled Wheels Up, which featured artists like Nipsey Hussle, Tyga and more. In 2012, he was the Best Artist in the 2012 XXL Freshmen.

Kid Ink released her first independent album, Up & Away, on June 12, 2012, to moderate success. The album was produced by Ned Cameron and Jahlil Beats among others. It peaked at number 20 on the US Billboard 200 in its first week. The first single from the album, "Time of Your Life" was preceded by albums to be released in early 2012 followed by the second single from the album, "Lost in the Sauce". On November 21, 2012 Kid Ink released his fifth mixtape, "Rocketshipshawty".

On January 4, 2013, he announced that he had signed to RCA Records, and that the single for his debut studio album, Bad Ass with Wale and Meek Mill, was being produced and produced by Devin Cruz. The song was released to Radio Crossover Beat in the US on February 26, 2013. It has since peaked at # 90 on the Billboard Hot 100.
In March 2013, Kid Ink joined PETA in their Ink Not Mink campaign.