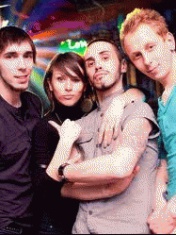 The IOWA group was founded in 2009 in Mogilev. In 2010, the musicians on the VKontakte social network met a man named Vitaly Galushchak, who was "hooked" on the musicians' creativity. The first "apartment houses" were organized in St. Petersburg and performances in small clubs, after which it was decided to move to St. Petersburg, where the musicians met the producer Oleg Baranov. Before the first successes on radio and television, the group performed on the streets of the city more than once.

The vocalist of the collective - Ekaterina Ivanchikova sang in the musical by Ilya Oleinikov "The Prophet".

In March 2012, the group took part in the TV show "Red Star on the First". In May '12, the video for the song "Mama" received its first million views. In July, the group represented Russia at the New Wave contest, where it received a special prize “The Choice of Love Radio Listeners”. In December, the song "Mama" was included in the reporting concert "Krasnaya Zvezda: 20 Best Songs of 2012".

On January 14, 2013, IOWA performed the song "Looking for a Husband" on the TV show "Let's Get Married" on Channel One. In February I recorded the song "Bride" at the Saratov television studio. In March, they performed the song "Mama" on the TV show "Big Dances" for the Volgograd team. On September 21, the group came with their main hits "Simple Song" and "The Bride" to a gala concert in Volgograd to congratulate TRK Europe City Mall on its birthday, where more than 5 thousand spectators came to listen to the young group.

The creativity of the IOWA group is difficult to fit into any stylistic framework. He was influenced by many artists including Guano Apes, Kings of Leon, Moby, Pink and Lady Gaga. Music for the members of IOWA is not just a hobby, it is a profession: "Our songs are a reflection of ourselves, small stories about love and loneliness, about joys and hardships. We sing about what we feel, what we really care about. Sometimes an ordinary song can disturb memories, like silt from the bottom of the ocean, a fallen anchor. Such an anchor can be a certain sound, smell, color, taste. So I want to think that our story can become such a sound, with which the event of only your, separately taken, life will be connected After all, it is precisely from such moments that it consists. "