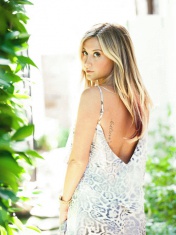 Ashley Tisdale, full name Ashley Michelle Tizdale, was born on July 2, 1985, in Monmouth County, New Jersey. The girl got on television at a very early age. And how not to be an actress, if you have someone to take an example from - the older sister Jennifer. Ashley's manager, Bill Perlman, is her first producer and continues to represent her today. After her first audition, she successfully appeared in over 100 national advertisements.

At the age of eight, Ashley Tisdale landed the lead role on a national tour of the Broadway musical Les Miserables. Her solo album "Headstrong" debuted in February 2007 and entered the Billboard Top 200 list at the prestigious number five. Tisdale was also named People's U-25, Vogue's Young Hollywood Stars, and the popular Entertainment Weekly's annual Must List in Musical Hopes. ("Must 'Musical' Prodigy").

Ashley Tisdale decided to rise to the very heights of Hollywood, but like all aspiring actresses she started from the very small - participation in supporting roles in the popular series "Beverly Hills 90210", along with the same aspiring actors: Jenny Garth, Ian Ziering, Tori Spelling and Brian Austin Green. The plot of the famous youth series "revolved" around the protagonist Brandon Walsh and his friends. Walsh, along with his sister Branda, moves from Minnesota to California, to the prestigious Los Angeles area of Beverly Hills, and makes new friends at school. Young people reveled in this series, because, despite its light, adolescent character, it nevertheless touched upon many burning topics: drugs among youth, teenage alcoholism, rape, teenage suicides, the use of violence against children, the rights of sexual minorities , AIDS, teenage pregnancy and many others.

This was followed by a series of films in which Ashley Tisdale has firmly established herself as a versatile and gifted actress, who is equally well at both comedic and dramatic roles. In 1996-2007, the family series "Seventh Heaven" was published about Eric Camden and his wife Annie, who are raising seven children. The family constantly sorted out the relationship, which between relatives only grew stronger from this. Shooting, albeit not central, in the cult TV series Charmed, Again and Again, 100 Exploits of Eddie McDowd, Strong Medicine, George Lopez and Malcolm in the Spotlight, as well as minor roles in the films in 2001, "Donnie Darko", propelled their careers forward, maybe not as fast as we would like, and made Ashley more and more popular. Tisdale finally rose to prominence for her role as the resilient Mehndi, the candy saleswoman, in the 2005 Disney Channel sitcom The Full Life of Zach and Cody. And fame gradually entered the cinematic life of the young actress.

Being at the very beginning of her career, Ashley Tisdale did not think at all about the complexities of life and enjoyed well-deserved fame, after the release of the film "High School Musical" directed by Kenny Ortega in 2006, where she simply amazed filmmakers with her energy and charisma and a strict criticism. The film was released in January 2006 and immediately began to rise to the top lines of the rating, subsequently taking the highest rating in the history of the Disney Channel. For filming Ashley Tisdale in the musical dyed her hair in a brunette, as one of the producers "had the imprudence to drop" that "there are a lot of blondes, and it would be nice if someone from the team dyed their hair in dark colors."

This decision was made by the actress herself, and this was not stipulated in the contract, but many fashion critics noted that she was even better as a brunette. It was then that Ashley made her debut simultaneously with two songs, which happened for the first time in the history of film music. Later the debut album "Headstrong", recorded by "Warner Bros", was released. This album included hits such as "He Said She Said", "Be Good To Me" and "Not Like That".

And in 2007, the sequel "High School Musical 2" was released, which turned out in the best traditions of youth entertainment cinema with good music, bright colors and characters, more "interesting and elaborate" than in the first part. After such a successful movie breakthrough, the actress was just "in the grab." And it is not surprising, because Ashley Tisdale played as a professional actress, along with other performers of the main roles: Zac Efron and Vanessa Ann Hudgensa, and it was immediately obvious that she was very kind, energetic, perky, and, which is important, very talented.

The musical was such a success that the producers had no choice but to film a further sequel. And so in 2008, "High School Musical: Graduation" was published, whose beloved heroes matured, school years came to an end, and everyone had to prepare for college. And the enamored high school students Troy and Gabriella also had to prepare a gorgeous graduation ball with the Wild Cats group, and sing about the past and such an incomprehensible future.

Then, for Ashley Tisdale, an insane cycle of star roles began, and the actress, not afraid to experiment and try herself in other roles, gladly starred in the films "Hannah Montana", "Back on Tour" 2006, "Bring Success: All for Victory" in 2007, Through the Lens in 2008, and Aliens in the Attic in 2009.

The film "Devils" in 2010 also took an honorable place in the filmography of Ashley Tisdale, she was invited to the main role - Savannah Monroe - the captain of the cheerleading team "Devils". The heroine Ashley Tisdale is a native of Texas, that is, a truly "southern" beauty. Savannah is very energetic and cute. And she spent all her energy on training the "Devil's" team, which, in spite of what difficulties, both everyday and sports, must win. For the role of Savannah Monroe, the producers of the series asked actress Ashley Tisdale to repaint - they needed a "little brunette", and for the actress it was not a problem, judging by the experience from past films.

In addition to the time spent on the set, Ashley Tisdale was actively involved in various commercial film promotions. One of which was her participation in "T-mobile" along with the popular Catherine Zeta-Jones.

Ashley Tisdale is also constantly invited to voice the heroes of popular anime, the directors simply "love the voice of the actress": in 2002 - "Kim Five-Plus", in 1995 - "Whisper of the Heart", and in 1998 - "The Adventures of Flick."

Ashley Tisdale does not hide her personal life, and why ?! Tisdale is at the very beginning of his career, does not think at all about the complexities of life and enjoys well-deserved fame. Among her close friends are the actors of the series "Hannah Montana", they spend a lot of time together, relaxing at parties and doing shopping. Ashley Tisdale carefully monitors her skin and hair, constantly visiting beauty salons. Ashley currently lives in Los Angeles.

9
Crank It Up
Comments