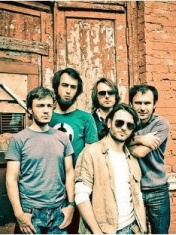 Okean Elzy is the most famous Ukrainian rock band. The history of the band began on October 12, 1994. Prior to that, vocalist Andrei Golyak, guitarist Pavel Gudimov, bass player Yuri Khustochka and drummer Denis Glinin played together in the Clan of Silence, but acquaintance with Svyatoslav Vakarchuk marked the beginning of a new group. The guys decided to call themselves "Elzy's Ocean" and began to rehearse regularly. Back then, the band played mainly urban rock - a mixture of pop and punk. Having become popular in Lviv, at the beginning of 1998, "Ocean Elzy" moved to Kiev and prepared material for the first full-length disc.

The debut album was released in September 1998 and was called "Tam, de us mute". The songs of the group take first places in the charts, their lyricism and vocals of Svyatoslav Vakarchuk win fans all over Ukraine. In 1999, "Okean Elzy" at the Tavriiski Igri festival received the "Breakthrough of the Year" and "Best Song" awards (for the composition Tam, de us mute). At the beginning of 2000, the group completed work on another disc - "Yananebibuv". After her recording, keyboard player Dmitry Shurov joined the team, and performances and rehearsals began in the new composition. Two times in a row (2000 and 2001) at the Tavria Games "Ocean Elzy" was a laureate in the category "Best Pop Group". In 2001, the group recorded the best album of Ukrainian rock music according to most critics - Model. In the same year, "Okean Elzy" cooperates with the "Pepsi" company and tours around Ukraine. After the release of the disc "Supersimetry" (2003) in the summer of next 2004, bassist Yuri Khustochka and keyboardist Dmitry Shurov left the group, and in 2005 guitarist Pavel Gudimov also began his solo career.

Since 2004 bassist Denis Dudko (former double bassist of the Kharkov jazz band Skhid-Side) and Serbian keyboardist Milos Yelich have been playing in the group. In 2005, guitarist Peter Chernyavsky joined the band.

Vocalist Svyatoslav Vakarchuk, as a UNDP Goodwill Ambassador for Youth in Ukraine, participates in many social and cultural projects. In addition, all the money raised from the sales of the single Veseli, brother, the hour has come ..., were transferred to a kindergarten in the city of Makeevka.

On September 22, 2005 in Kiev "Okean Elzy" presented their fifth studio album "GLORIA". According to the release label Lavina Music, in the first six hours after the start of sales, the album went platinum, selling over 100,000 copies.

At the end of 2008, Svyatoslav Vakarchuk resigned as a deputy of the Verkhovna Rada of Ukraine to study music. In November 2009 it became known about the imminent release of the new album. The first internet single was released in the same month and was called "I want it so ...". Also, the song "Dolce Vita" was released as an internet single. The musicians worked on the disc for six months - from July 2009 to February 2010.

On March 10, 2010, the long-awaited 7th studio album, Dolce Vita, was released after a three-year hiatus between the band's studio work, followed by a large Dolce Vita tour.

In early 2011, Svyatoslav Vakarchuk announced the start of work on his new solo project, in which, as in the previous solo album Vnochi, musicians from Okean Elzy will participate. According to Svyatoslav, his new solo work will differ from his previous project Vnochi and from the work of the Okean Elzy group as a whole.