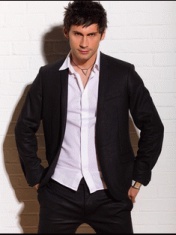 Dan Balan (sometimes pronounced his surname as Balan) was born in the city of Kishinev (Moldova) in the family of Ambassador Mihai and TV presenter Lyudmila Balan. From childhood, Dan was fond of music, learned to play the accordion.

Dan's musical career began as a teenager: he played in the bands Pantheon and Inferialis, which made music in the style of "gothic doom metal". In 1998, Balan recorded a solo composition "De La Mine", and a year later, together with his friend Petru Zhelikhovsky, he created the O-Zone group. The band's debut album was called "Dar, Unde Eşti ..." ("But where are you ...").

In 2001, Balan reformed O-Zone, taking Arseniy Toderash and Radu Sirbu into the group. The trio soon signed a contract with a Romanian record company and released the album "Number 1". The songs "Numai Tu" and "Despre Tine" became hits in Moldova and Romania. The album "DiscO-Zone" followed soon after. The single "Dragostea Din Tei" from this disc made the group one of the most popular in the whole world. Despite the fact that the song is performed in Romanian, the song remained at number one on the European Hot 100 Singles chart for 12 weeks.

O-Zone disbanded in 2005. All the participants took up solo careers, but only Dan Balan became world famous. The singer gathered the best Moldavian and Romanian musicians, created the pop-rock group Balan with them, and left for Los Angeles, where he worked for two years with the most famous American producers. In parallel, he recorded the album "The Power of Shower" under the pseudonym Crazy Loop.

In December 2009, the presentation of the album "Crazy Loop Mix" took place in Kishinev. This work is the result of a symbiosis between Crazy Loop and Dan Balan himself.

In February 2010, Dan Balan released the single "Chica Bomb", performed as a duet with American singer Katie DiCicco. The track took first places in all European charts. Soon the singer realized that the greatest popularity awaits him in Russia. At the end of 2010, he recorded the song "Petals of Tears", performed together with Vera Brezhneva.

In subsequent years, Dan Balan continued to conquer Europe and the CIS countries, releasing songs either in English or in Russian.