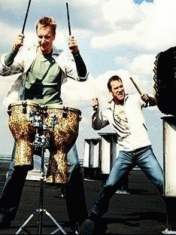 Percussionists Uffe Saveri and Morten Friis were educated at the Danish Royal Conservatory, and, while still students, formed a duet, unpretentiously composing the name from the first letters of their names. At first, Uffe and Morten did not even dream of a career as a pop artist, recording their own interpretations of works by Johann Sebastian Bach (JS Bach), Frederic Chopin (Frederic Chopin), Bela Bartok and Steve Reich on marimbas and vibraphones. However, in 2000 their work unexpectedly caught the attention of DJ and producer Michael Parsberg. As a result, the track "The Bongo Song" was born, which immediately became a hit on radio stations and TV channels. The highlight of the new reincarnation of Safri Duo is a combination of expressive Afro-Asian drums with a frivolous club sound.

Safri Duo have become one of the most sought-after mainstream bands: as guests of honor, the Danes performed at the Eurovision Song Contest, which Denmark held in 2001, and the track "Bongo Song" sounded at the opening of the Sydney Olympic Games, eventually becoming one of the best-selling singles in Europe for the year. Since then, the group has dramatically changed direction. Now their strong point was the combination of ethnic rhythms and electronics: the Danes were balancing on the verge of trance and world music, every now and then dropping into pop territory, attracting famous vocalists to record individual tracks. For example, the Senegalese singer Youssou N'Dour took part in the recording of the disc "Origins", and the single "Sweet Freedom" was recorded together with the American soul singer Michael McDonald.