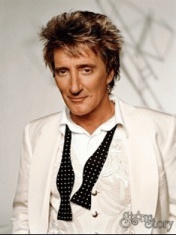 
Roderick was the fifth child in an English family, his parents were fond of music and football - Rod's father played in the team and predicted a football career for his son. However, in 1959, Rod received a guitar from his father and soon began to play in youth groups. To the chagrin of the dad, the son gave up his football career, as she did not allow walking, drinking and meeting girls. As a result, Rod became a handyman, constantly trying his hand at various bands and auditions for producers - without any notable success.

Disappointed with the then popular rock and roll, Rod joined the ideological antagonists of rockers - the fashion movement and even became popular among the youth of London due to his emerging husky vocal style and impressive appearance - Rod was one of the first musicians to wear a disorderly "spiked" a hairstyle that would become the hallmark of punks in the 1980s. In general, in the first half of the 60s, Stewart, in his attempts to become famous, "got tired" so much in the musical circles of London that he became already quite famous among the musicians of his "circle".

Success came to the vocalist when he joined the group of blues guitarist Jeff Beck (Jeff Beck). With Jeff, they went on a tour of England and Western Europe. Rod sang in the group from 1967 to 1969, and after parting with Beck, along with his friend Ron Wood (Ron Wood) joined the group Faces. In 1969, Rod released his first solo album, An Old Raincoat Won't Ever Let You Down. His solo career went parallel with his activities in the Faces group, and the music of the ensemble, compared to Rod's own albums, was more aggressive and modern - later Faces was even called one of the forerunners of punk rock. The material that Rod recorded as a solo artist was distinguished by accuracy and adherence to tradition - some of the songs Rod wrote himself, and also covered the classics of folk and rhythm and blues. His first solo hit was "Maggie May" (1971). This song remains one of Stuart's most famous songs to this day; it is also on Rolling Stone's list of "500 Songs That Shaped Rock 'n' Roll." Critics of the time were more than supportive of Rod and extolled his talent as a singer, artist and songwriter. Meanwhile, the Faces group, although it was quite popular in America and Britain, in 1975 announced its disbandment by the collective decision of the musicians.

In the second half of the 1970s, Rod Stewart moved to the United States to escape British taxes, which prevented many of the then musicians from existing. In 1978 he recorded the disco hit "Da Ya Think I'm Sexy?" and began to use glam elements in his image - bright colors, tight clothes, etc. This alienated many well-wishers from the critical environment, but attracted a significant part of the public on both sides of the Atlantic. Rod continued to add elements of glam, new wave, disco and other styles of popular music to his music and image.

Although Stewart's career stagnated in the 80s, he resurrected in the early 90s - in 1993, the famous song "All For Love" was recorded with Sting and Bryan Adams, and in 1994 Rod Stewart entered to the Rock and Roll Hall of Fame. The 1998 album "When We Were the New Boys" contained cover versions of songs from British bands Oasis and Primal Scream, as well as a new version of the old Faces hit "Ooh La La" - many of Rod's young fans heard this song for the first time in 1998.

I must say that by the early 1990s, Rod Stewart practically stopped recording his own material - according to the musician, he was not born a songwriter. Perhaps it was this thought that led him to fulfill American standards - famous jazz and folk compositions. In the 2000s, Rod Stewart released four albums with the subtitle "The Great American Songbook". The sales and popularity of these albums are quite comparable to the success of the work of the young Rod Stewart - the performance of "the best and the beloved" brought the musician to a new round of fame, with a touch of chic and mature aristocracy. For the album "Stardust: the Great American Songbook 3" (2005) Rod Stewart won a Grammy award.

In addition to his musical activities, Rod Stewart still remains a devoted football fan of the Celtic FC club, recalling his football youth, knocks balls into the hall at concerts, is fond of models of railways, expensive cars and is a recognized womanizer - now Rod is in his third marriage with a model and by photographer Penny Lancaster-Stewart.

03:12
В избранное Новый плейлист
Клип Rod Stewart - Have You Ever Seen The Rain