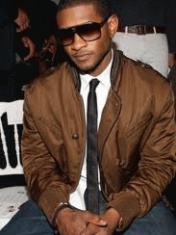 One of the most commercially successful African American R&B musicians, Usher was born on October 14, 1978 in the United States. Asher began singing at the age of nine in the church choir, showing unambiguous abilities, and his family understood this, which moved to Atlanta, Georgia for the sake of Asher's career. In particular, the singer's mother closely followed his career; it was by her decision that the young member of the NuBeginnings group left his first musical project. Until 2007, the singer's manager was his mother.

On August 30, 1994, Usher's debut studio album "Usher" was released. Sean Combs was one of the producers of this album. The album reached number 25 on the Top R & B / Hip-Hop Albums chart. The album has currently sold 500,000 copies.

Immediately after leaving school, Asher began work on his second album, which was released on September 16, 1997. The single "You Make Me Wanna" from that album was Usher's first single to reach # 1 on the UK charts and went gold and platinum in the US. Another single from the album, "Nice and Slow", reached # 1 on the Billboard Hot 100, becoming Usher's first top single in the United States. The album itself went platinum six times. For the single "You Make Me Wanna," Asher received a Grammy nomination; in addition, for the same song, Usher received the Soul Train Music Awards in the category "Best R&B Single". Usher's first live album, "Live", was released in 1999. The album went gold in the US.

You couldn't even wish for a better start to your career. This encouraged the young musician a lot. However, in parallel, he began acting in films. He made his debut in the television series "Moesha". In 1998, he starred in the film The Faculty and the soap opera The Daring and the Beautiful. A year later, Asher played one of the main roles in the movie "Light it up, guys."

Usher's album 8701 was released on August 7, 2001. Work on it took a long time. It was renamed and edited. The singles "U Remind Me" and "U Got It Bad" from this album stayed at the top of the Billboard Hot 100 for four and six weeks, respectively. The album "8701" itself was certified four times platinum in the United States.

The singer's fourth album "Confessions", which was released on March 23, 2004, brought Asher a resounding success and many awards. The album received diamond status. The singer has received four American Music Awards, two MTV Europe Music Awards and three World Music Awards. In 2005, Asher received three Grammy awards: Best R&B Vocal Performance by a Duet or Group for the single "My Boo" (with Alicia Keys), which was included in the special edition of the album "Confessions"; in the category "Best Contemporary R&B Album" and "Best Collaboration in Rap Style" for the single "Yeah!" (shared with Ludacris and Lil Jon). At the 2004 Billboard Music Awards, Asher was named Performer of the Year.

On February 14, 2012, on Valentine's Day, the Internet release of the first single from the album "Climax" took place. On March 30, Asher officially confirmed the album's title and release date: June 12, 2012.