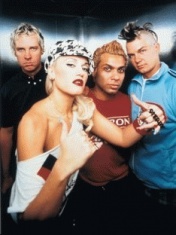 This collective has a very turbulent and confusing pre-official history with a mass of line-up changes, two unsuccessful albums, as well as the suicide of the second vocalist - a person who seemed completely unwilling to commit suicide, in whose lips the optimistic “No bazaar!” Sounded every now and then. However, the group became known to the general public only in the 90s. It was amazing to meet the American team that made their way into the charts of those years, whose songs were different from each other! And this was at a time when the disc was being recorded for the sake of two hits of dubious quality, and if suddenly a material was composed that was different in style from the previous one, it was time to create a new project for it. Is it possible? Undoubtedly! Without a bazaar! No doubt!

Conceived and formed by Californian Eric Stefani (1964), his sister Gwen (Gwen Stefani, 1969), and their mutual friend John Spense back in 1986, the group has long and painfully made its way onto the big stage. Musicians came and went, no stable income was foreseen. In December 1987, the first crisis broke out - after a quarrel with his parents in an attack of depression, Spence committed suicide. At the next concert, the band's disbandment was announced, but the very next day Gwen and Eric decided to continue working.

Things suddenly went smoothly, and a couple of years later the line-up stabilized: Gwen Stefani - vocals, Eric Stephanie - keyboards, Tom Dumont (1968) - guitar, Tony Kanal (1970) - bass, Adrian Young (Adrian Young , 1969) - drums. After unsuccessful tests, they decided not to take anyone to the place of the late Spence, and Gwen remained the main vocalist. However, the breakthrough was still far away.

Times, however, changed - the grunge boom faded away as abruptly as it began, and in sunny California, cheerful guitar rock with ska elements triumphed again. It was then that brother and sister Stephanie showed the real class of the game: the hellish polystyling of "Tragic Kingdom", the third disc of No Doubt, released by the studio "Trauma", finally caught the audience. Bolan blues "The Climb", reggae "World Go 'Round", aerosmite ballad "Don't Speak", glam reggae "Spiderwebs", punk foxtrot "Excuse Me Mr.", operetta title "Tragic Kingdom" (where guitarist Dumont's "metal" past was exploding) and other, no less carbon monoxide compositions gave the impression of an application for the future of the upper class: it was one of the few albums of the decade in general, interesting from first to last note.