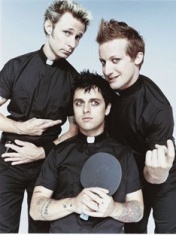 
Green Day had a chance to repeat the fate of many alternative teams of the 90s - abruptly and impudently jump to the top of the charts, settle there, spit from the top on the heads of rivals, and then slide down with a crash, giving way to the new "king of the hill", sinking into oblivion. Nevertheless, the American truth-tellers reoriented themselves in time, becoming almost the main political tribunes of the planet.

They took off on the third album - the song "Basket Case" from the 1994 album "Dookie" sounded almost from every iron, and the shaggy trinity of newly minted punks, the successors of the alternative cause of the American music industry, informed everyone and everything that they still had creative ideas full and they will not turn into a group of one song. Nevertheless, reality almost proved the opposite - Green Day plunged into a dead end of a creative crisis, and it was not very clear whether they would get out of there or not.

But Billy Joe decided to act like a real punk - protesting. After all, if you are a punk, then the protest against everything that exists should become the basis of your worldview. For Green Day, President George W. Bush and his administration were the target of such a protest. The 2004 album, directly called "American Idiot" in punk, became a kind of punk opera criticizing Bush's policies for which it stands.

Green Day went on a large-scale tour - and, as it turned out, hundreds of thousands of spectators sympathized with politically active punks. The time for stadiums returned, and political activity continued - the new works of Greeb Day are distinguished by pomp, scale and ardent political challenge, and the album "21st Century Breakdown" has already earned the highest marks from critics and listeners ..

06:49
Wake Me Up When September Ends (Short Version)

1
Wake me up when september ends

02:57
When I Come Around
Когда я вернусь