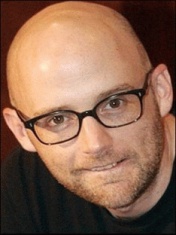 
Moby looks a little like a pop star. A bespectacled intellectual, preoccupied with political issues, a consistent vegetarian, and finally, the owner is far from Apollo's appearance. However, his records are sold better than the discs of other boy bands. In his youth, Moby listened to Joy Division and played punk, later became interested in electronics and released a whole series of techno records under various names. The pseudonym Moby (this nickname Richard received in honor of the book "Moby Dick", the author of which, Herman Melville, is a great-nephew) appeared in 1991. His single "Go", based on samples of the theme from the movie "Twin Peaks", hit the top ten of the UK charts, and Moby himself - on the program "Top Of The Pops", but the life of the pop star Moby was not very attractive. He continued to make music for his own pleasure, recording rave, punk, and ambient. Sometimes, as in the case of Everything Is Wrong, his creations were a commercial success, sometimes, like the Animal Rights album, they failed miserably.

The conquest of the world was not foreshadowed, but the album "Play", released in 1999, became a real bomb and sold over ten million. On top of that, Moby's music was in demand in advertising. There was no track from "Play" that would not become a soundtrack for some video. Moby himself was perplexed as to why everyone liked the melodic breakbeat sampler, but made the next album “18”, in fact, a sequel to “Play”. However, then he started experimenting anyway, since the name was already working for him, and the musician was insured against commercial failures. On Hotel, Moby sang and played a lot of guitar, and on the follow-up three years later, Last Night experimented with Disco Lies and retro house in a late-eighties aesthetic (Everyday It's 1989). Becoming a star, Moby began to actively record duets. The list of collaborations grew before our eyes - Public Enemy, Gwen Stefani, Deborah Harry and even Mylene Farmer. In 2009, Moby announced that he was tired of show business and was going to release a non-commercial album. The CD "Wait For Me", released by his own label "Little Idiot", was somewhat reminiscent of "Play", ie. was not such a slap in the face of public taste, but sounded really quiet and introverted. Contrary to the expectations of the author himself, the audience accepted the disc with a bang - the circulation of "Wait For Me" exceeded half a million.

07:21
God Moving Over The Face Of The Waters