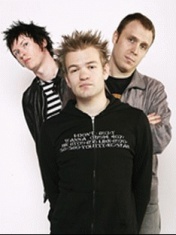 
The history of the group Sum 41 does not contain anything remarkable - all the more unexpected is the success that has befallen the team in recent years. The band was founded in 1996 in the Canadian city of Ajax by vocalist Deryck Whibley and drummer Steve Jocks. They soon found lead guitarist Dave, and after changing several bass players, they worked with Jason McCaslin.

4 years after the creation of the group, the guys released a demo, then an EP, and after it the first album "All Killer No Filler", which turned out to be in tune with the requirements of the time and immediately took the group to the Olympus of pop-punk, on which they already sat, dangling their legs and throwing down with beer cans, Offspring, Green Day and Blink 182. Sum 41 differed from the last only in a slightly denser and more varied sound (thanks to the use of two guitars), childish professionalism (listening to Sum 41, you feel that these people are capable of playing a much more serious and complex music) and a much longer period of existence.

Sum 41's line-up remained stable until 2006, when Dave Baksh left the group to play heavier music on his Brown Brigade project. Sum 41 leader Deryck Whibley was not at all upset about this, since he had just married Avril Lavigne and his mood was nowhere better. However, in 2009, Lavigne filed for divorce, citing "insurmountable contradictions" as the reason. However, Derik did not become sad even here, because during this time Sum 41 managed to find a new guitarist Tom Thacker and released two albums - "Underclass Hero" and a collection of the best hits.

Whibley is still not discouraged: 20 songs have already been written for the new studio album, and, in addition, the band's participation in the Warped Tour 2010 has been confirmed. The unremarkable but consistently successful story of Sum 41 continues.