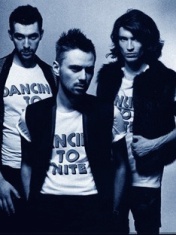 The debut album of the Moscow team Tesla Boy is perhaps one of the most hotly anticipated releases of 2010. In any case, after the release of the first EP Tesla Boy gained wide popularity not so much in Russia as abroad - the group performs the "ideal" English-language synth-pop of the 80s, which the listeners liked (and most importantly now - bloggers! ) from all over the world. At the same time, many Russian listeners (including professional musicians) could not even suspect in this case the products of a "domestic manufacturer". And this is actually so - the founder of the group Anton Sevidov, the former leader of the electropop group Neonavt, while working with the Bi-2 group, met their drummer Boris Lifshits, and at the end of 2008, together with bassist Dmitry Midborn, they organized Tesla Boy. The rise of the group to popularity was impressive, not least due to bright performances - like real pop stars of the 80s, they actively behave on stage, capturing the attention of the public.

Both their first EP and subsequent episodic releases (remixes of songs from the EP) the musicians decided to release on the London electro-pop label Mullet Records. Tesla Boy is generally critical of the Russian music industry - in particular, in an interview with Sounds, Anton Sevidov complained about the lack of good music video makers in Russia, but promised not to give up and continue searching. This strategy was crowned with success - the director Igor Shmelev filmed the main hit of the group, the song Electric Lady, quite a "classic" clip in the style of the 80s. In the spring of 2010, Tesla Boy, who had already performed abroad many times, went on a small tour of Russia.