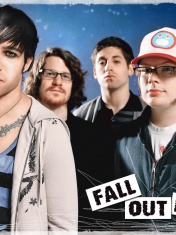 In 2001, the four on their own recorded and published a demo tape with three songs, and in 2002 a label was found that agreed to release an album, combining several tracks from Fall Out Boy and Project Rocket, the former band of drummer Andy Hurley. The musicians did not harbor any special illusions about themselves, but the effect of the first release, and especially from their bright concerts, exceeded expectations. When the band returned to the same label in early 2003 to record a new mini-album, it turned out that the situation had changed a lot over the past six months. After the release of the mini-album "Fall Out Boy's Evening Out With Your Girlfriend", which received good reviews in the local press, Fall Out Boy had already left the category of dark horses, and the managers of several record companies began to actively court the young team. The musicians entrusted the release of their debut album to the Florida label Fueled by Ramen, founded by Vinnie Fiorello, drummer of the punk band Less Than Jake.

In May 2003, the full-length album "Take This to Your Grave" appeared in the Fall Out Boy discography, which lit up in the top 10 independent sales ratings and became a strong argument for the major label Island Records, which has long had an eye on the Chicago quartet, but how -that all did not dare to legalize the relationship. Album "Take This to Your Grave" sounded quite confident and attracted many critics. This robust selection of punk melodies convincingly combined romance and irony, tight guitar riffs and a parody of pop clichés. The musicians are obviously already out of the influence of Green Day, whose music once inspired them to take up punk. Peter Wentz dubbed Fall Out Boy's sound "softcore", meaning something between hardcore and pop punk. The multi-month concert marathon, honestly worked out by the team, introduced the new Chicago formation to the wide punk masses. The masses were pleased with what they saw and heard.

In May 2004, the band released an acoustic mini-CD, My Heart Will Always Be the B-Side to My Tongue, which included a remake of the Joy Division classic Love Will Tear Us Apart. The release enjoyed considerable popularity in the punk commune.

Finally, in May 2005, Fall Out Boy released their second studio album, "From Under the Cork Tree," which owes its name to the children's book The Story of Ferdinand by Munroe Leaf. It was produced by Neil Evron, who was responsible for the sound of the band A New Found Glory. Hundreds of concerts worked out over two years and a good promotional campaign guaranteed the team the closest attention to its latest release, which sold 70,000 copies in the first week and was noted in the Billboard 200, and subsequently received platinum status three times. The explosive single "Sugar, We're Goin Down" brought Fall Out Boy's first 100% hit, conquering the 8th position on the Billboard Hot 100. Not the least role in this was played by an excellent video clip, which was actively rotated and was awarded the MTV2 Award at the ceremony. MTV Video Music Awards in 2005. The second single "Dance, Dance" is not far behind in the charts. Even the organizers of the Grammy did not ignore the four, nominating them for an award in the category "Best New Artist". Also the song from this album "7 Minutes In Heaven (Atavan Halen)" can be heard in the game "FlatOut 2".

The highlight of Fall Out Boy's touring schedule in 2006 was a concert tour called The Black Clouds and Underdogs Tour. Leading it as headliners, they chose several bands as their support group: The All-American Rejects, Hawthorne Heights, From First to Last, The Hush Sound and October Fall. Young teams took turns opening their performances in dozens of cities in North America and Europe.

Despite a very busy 2006 touring schedule, Fall Out Boy managed to find time to record a new album, their third in a row. The album called "Infinity on High" was released in February 2007. The Babyface man-orchestra, which specialized mainly in rhythm-and-blues and pop artists, as well as the rapper Jay-Z, was hired for producing. In addition, Ryan Ross from Panic! At The Disco and Chad Gilbert of A New Found Glory.

In an interview with Billboard Weekly, Patrick Stump noted that although the album uses pianos, strings and winds more actively than before, the musicians “tried not to get too carried away. At the end of the day, there are just four guys playing at the center of these songs - drums, bass and two guitars. It's just rock songs ... From song to song, the feeling changes completely, but in context they are all meaningful. They all have something in common, but in general there are many different voices, perspectives and styles. It would be unfair if we tried to contain any of these elements. "

The singles "This Ain't A Scene, It's An Arms Race" and "Thnks fr th Mmrs" instantly became hits, and the group went on another world tour. [5]

In December 2008, the world saw a new album with the original French title "Folie à Deux", which means "Madness of Two". Critics were controversial about this album, some took the side of "Fall Out Boy - opopssel", while others that "they [FOB] just got older." No matter how critics think, the opinion of loyal fans has always been considered more, and their verdict is that the album was a success. In it everyone will find a song for themselves. And this is good news.

The band spent the beginning of 2009 on tour. Japan, Australia, Europe and all US states. The concerts were held with a full house, which testifies to the crazy popularity of the group. In early summer, Fall Out Boy decided to take a break, but this is unlikely to stop them before creating new hits and conquering new heights.

On February 4, 2013, the band announced the end of the hiatus. On May 6,7, 2013, they announced the release of their sixth album, "Save Rock And Roll", worldwide. The album's release was later postponed to April 15th.

03:20
The Patron Saint of Liars and Fakes

03:55
Headfirst Slide Into Cooperstown On A Bad Bet

02:51
Snitches And Talkers Get Stitches And Walkers

03:24
Sophomore Slump Or Comeback Of The Year