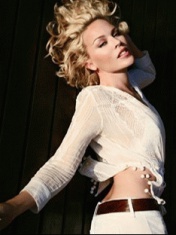 
Kylie Ann Minogue (May 28, 1968, Melbourne, Australia) is an Australian singer, songwriter, and actress. She became popular in her youth in the mid-1980s thanks to her role in the Australian television soap opera Neighbors - even before she began her career as a pop singer.

After signing with British songwriters and the production trio Stock, Aitken and Waterman, Minogue hit charts around the world, but her popularity began to decline by the early 1990s, leading to a split in 1992.

For several years she acted as an independent artist and songwriter until she finally signed with deConstruction, a dance label (a division of BMG), distancing herself from her early work. The change of label was followed by a new peak of Kylie's popularity: the album "Fever" released in 2001 by the end of the decade will enter the top 50 best albums according to the BBC, and in 2004 the singer will receive her first Grammy statuette.

03:17
All The Lovers
Все любовники

03:39
Some Kind Of Bliss
Разновидность счастья

04:07
There Must Be an Angel (Playing With My Heart) (Live from Aphrodite/Les Folies)

07:54
The Abbey Road Sessions (Behind The Scenes)

I Was Gonna Cancel

Stop Me from Falling
Комментарии