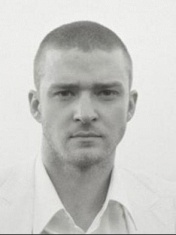 
Justin was born in 1981 in the suburbs of Memphis, Tennessee, and his first musical experiences were, unsurprisingly for an American child, in country music. However, the direction of the boy's interests changed in 1993, when he became one of the actors on the children's television show The Mickey Mouse Club. Here he met future star friends and girlfriends - Christina Aguilera, Britney Spears and JC Chasez. The show ended in 1994, but in late 1995 young Justin invited his friend Chasez to take part in a new boy band called N'Sync.

It was with N'Sync that Timberlake became world famous. The group's debut album, released in 1998, sold 11 million copies, and the following two records were also overwhelming success. In 2002, following the completion of the Celebrity tour, the band took an extended sabbatical from which they never returned. In the same period, Justin begins work on a solo album.

Timberlake's 2002 debut album Justified sold half a million copies in its first week alone; As a result, this disc, produced by the giants of hip-hop and R&B, the production company The Neptunes and Timbaland, sold more than 10 million copies. The album became known around the world with the hits Rock Your Body and Cry Me a River. The popularity of the last song was also facilitated by the history of its writing: in fact, for Justin it was an anthem for breaking up with Britney Spears - having begun to be friends as a child, Justin and the pop diva subsequently entered into a more serious relationship and parted, as the tabloids reported, mainly at the initiative of Britney ... In addition to performing live and working on albums, Justin also began to skim the cream off his popularity, for example by recording a song called I'm Lovin 'It and selling it to McDonald's for $ 6 million.

In 2004-2006 Timberlake took a break from music and starred in a number of films - for example, in Alpha Dog; However, his most famous acting work remains the role of ... young Elton John in the video for the latest This Train Don't Stop Here Anymore - an inspirational performance that impressed even the most skeptical viewers. In 2005, Justin also underwent throat surgery, after which he was forbidden to sing and even speak loudly for several months. This did not stop him from starting work on the new album Future Sex / Love Sounds, which was released at the very end of 2006. Future Sex / Love Sounds exceeded all sales expectations and almost got close to its predecessor - 9 million. In 2008, Justin won two Grammy awards for two songs from the album.

Justin's career as a star and party-goer developed at a rapid pace - in 2007 he already performed with the queen of pop music Madonna (Madonna), recording with her the song 4 Minutes. Recently, he managed to work with Duran Duran, 50 Cent, Ciara, resumed his acting career, and also enjoys all the delights of "star life": he opens restaurants, launches a personal tequila brand, starred in advertising for Sony, Audi and Givenchy, launched a fashion line , is involved in children's charity, bought a golf course and hosted a golf tournament in Las Vegas.

Since October 2012, Justin has been married to Jessica Biel.

Man of the Woods