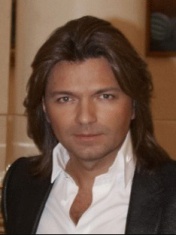 If the musical encyclopedia had an article "Compromise", the creative fate of Dmitry Malikov would be an excellent illustration of it. The musician with a conservatory education spent most of his career in the role of a pop artist, tirelessly emphasizing that first of all he considers himself a classical pianist, and only earns money on the stage. As a result, the classic train left him, frankly speaking, and in pop music he is being squeezed by less educated, but more relevant colleagues.

Dima was born on January 29, 1970 in the family of the artistic director of VIA "Gems" Yuri Malikov and the former ballerina Lyudmila Vyunkova (she has been working as a director at Malikov Jr. for many years). Yuri Fedorovich saw in his son the successor of the dynasty and from a young age began to teach him music. Dmitry did not really resist, quickly gave up the dream of becoming a hockey player and began writing songs. Malikov combined his academic education with work in "Gems", and soon made his debut with his own pop compositions "Moon Dream", "You Will Never Be Mine" and "Until Tomorrow". Pleasant tunes and good looks of the singer did their job: Dima felt the taste of success.

Tours, female fans, an affair with Natalya Vetlitskaya ... And nevertheless Malikov does not forget about his mission, graduates with honors from the piano department of the Moscow Conservatory - in general, he leads a double life: he sings pop music for the masses, plays classics for himself. In 1993, Dmitry starred in the title role in the film "See Paris and Die": according to the script, the hero had to shave his head, but the director regretted the musician's hair and changed the script. (Subsequently, Malikov starred in an ad for an anti-dandruff shampoo.)

After a series of pop albums, Dmitry finally returned to pianism and in 1997 released the instrumental album "Fear of Flight" with more "atmospheric" rather than academic numbers: I enjoy using music in TV screensavers. In 2001, the album "Game" was released with piano adaptations of popular Russian songs. It is already difficult to perceive Malikov as a classical pianist - at best he is engaged in the popularization of piano sound, and from the classics he performs only common hits.

At the same time, a pop career continues, allowing Dmitry to provide for his family. In 2000, Malikov and his wife Elena had a daughter, Stephanie. Dima is an exemplary family man who avoids any scandals: even parting with the Plazma group, which he once produced, was extremely bloodless. However, Malikov's popularity in the 2000s is noticeably inferior to his success in the 90s: although other people's songs appear in his repertoire, they rarely appear in the charts.

In 2007 Dmitry Malikov carried out his main so far "classic" project - the instrumental show "Pianomania", in which he experimented with entertaining presentation of serious music. In Pianomania, Malikov combined popular classics and movie melodies, dance and video installations - despite favorable reviews from critics, the show turned out to be too lightweight for the academic audience and too “bootable” for pop musicians.

On the occasion of his 40th birthday, Dmitry Malikov released the disc "Mine, Mine", which should become his last pop album: now the performer is going to pay the main attention to the piano.