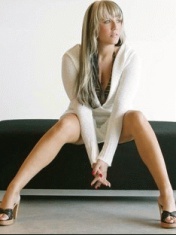 
Natalie Horler simply could not help but become a singer - the origin required. Natalie's dad, David, was a famous jazz musician in Germany and played in the WBR Big Band. At home, David built a studio, where he recorded not only his own compositions, but also attracted a growing daughter to work. They started with a simple one: songs from Disney cartoons, then moved on to hits from musicals, and then grown up Natalie began to compose and record her own songs, without the help of her dad.

Natalie's idol has always been Alicia Keys, but she didn't want to imitate her favorite performer. Therefore, the young singer decided to first take all European discos by storm, because you can, if you wish, weave elements of both soul and jazz into disco music, and also realize your acting and dancing abilities, provided that a good video is shot for a successful composition. Natalie began to implement her ambitious plan - and success was not long in coming: soon the compositions composed by Horner were included in the set lists of leading European DJs.

It was then that she was noticed by two producers - DJ Manian and DJ Yanou - who offered the girl a joint project in which they would play the role of a producer and organizational component, and Natalie would become the face and main creative force of the project. Natalie took the pseudonym Cascada and the work began to boil.

The first disc of the project - "Everytime We Touch" - made up cover versions of famous hits, including compositions from the repertoire of Meggie Reilly. There were not so many of the project's own compositions in the album, but it was also released almost in an emergency mode: the producers were in a hurry, and Natalie did not want to wait long. The debut album, seen by critics and dancefloor enthusiasts, was immediately followed by a second album, Perfect Day, which allowed Cascada to gain a foothold in the American charts, and, having conquered the American market, it could take some breathing space.

For this reason, the companions worked on Natalie's third album for almost a year. The double of "Evacuate The Dance Floor" turned out to be composed according to all parameters of a dance album: the first disc - actually new compositions, the second disc - remixes from various DJs. The main hit of the disc was the title track, on which a video was shot in the best traditions of glamorous parties of the early 21st century. And the energetic beat, Natalie's bright vocals and even the presence of rap in the chorus - all this ensured the song hitting the leaders of the British chart.

Nevertheless, in general, the third album Cascada caused an ambiguous reaction from critics: from the disc, on which they worked for so long, musical revelations were expected, and there are not so many of them on the album, except for the ballad "Draw The Line" and the acoustic composition "Hold Your Hands Up ".

But the audience accepted the album with enthusiasm, the compositions of Cascada sound at all European discos, which means that the project is quite viable and can still please us with musical revelations.

03:48
What Hurts The Most
Что больше всего причиняет боль

The World Is In My Hands

What Do You Want From Me