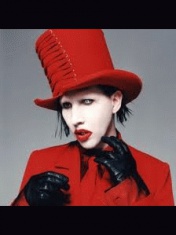 Marilyn Manson, whose real name is Brian Hugh Warner, is an American musician, artist and former music journalist, founder and leader of the rock band Marilyn Manson. His stage name was created thanks to the addition of the names of two opposites - the actress and model Marilyn Monroe and Charles Manson, who was convicted of several murders.

Brian Hugh Warner was born in Canton, Ohio as the only child in the family. His father, German by birth, was a furniture merchant, and his mother was a nurse. In his autobiography, The Long Hard Road out of Hell, Manson detailed his grandfather's sexual fetishes, which greatly influenced his worldview.

After Brian graduated from high school in Florida, he found himself a job at a local music magazine. There he acted as a reporter and music critic, writing poetry in his spare time. In 1989, Brian formed his own rock band with guitarist Scott Puteski.

The band first opened for Nine Inch Nails. Trent Reznor liked the young team and became a friend and informal mentor of its members. A sophisticated advertising campaign immediately brought the band's leader and vocalist to the fore, leaving everyone else in the shadows.

The image and musical style of the group changes from album to album almost beyond recognition, which gives reason to class it as industrial, glam rock, and new metal. Despite the fact that some elements of the listed styles are present in the music of Marilyn Manson, the group's creativity does not completely fit into any of the stated categories.

In January 2011, Manson collaborated with renowned surrealist director David Lynch to publish a joint book-catalog of his own work, which was shown at the Manson's Genealogies of Pain exhibition held in June-July 2010 in Vienna, Austria.

Over the entire period of the group's existence, 8 studio albums have been released.

"Portrait of an American Family" is the debut album by Marilyn Manson, released in 1994 via Nothing Records, Interscope Records. In total, more than 2.5 million copies of the album have been sold.

Antichrist Superstar is the second studio album by American rock band Marilyn Manson, which brought the band popularity and at the same time negative reviews from the Christian public. The album was released on October 8, 1996. As of 2008, Antichrist Superstar has sold 7.5 million copies worldwide.

The most recent album, Born Villain, was released in spring 2012.

05:04
2
Heart-Shaped Glasses (When The Heart Guides The Hand)

07:33
1
Heart Shaped Glasses (When The Heart Guides The Hand)

03:52
Angel With The Scabbed Wings

05:04
The Mephistopheles Of Los Angeles

01:01
Sympathy For The Parents

03:55
Mutilation Is The Most Sincere Form Of Flattery