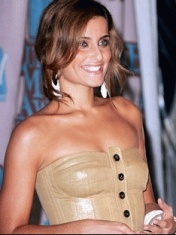 Nelly Furtado was born in Canada, but her parents are from Portugal, so the first language in which Nelly sang at the age of 4 was Portuguese. As a child, she learned to play the trombone, ukulele, guitar and piano, and at the age of 14 she wrote her first songs. As a musician, Nelly started in trip-hop underground bands, but decided that trip-hop was not the style in which she could fully develop. In 1999, she signed her first contract with Dream Works Records, and her first single, Party's Just Begun (Again), was featured on the Brokedown Palace soundtrack.

Nellie's international success came with the release of Whoa! Nelly (2000), from which the single "I'm Like a Bird" won a Grammy. A distinctive feature of the album was a mixture of different styles and genres, which looked favorably against the background of the “army of pop princesses” with the same sound and lyrics. After the release of her debut album, Nelly took part in the recording of numerous collaborations and duets. The second album, Folklore (2003), enjoyed less success; however, the single "Forca" became the official anthem of the 2004 European Football Championship.

Loose (2006), the singer's third album, was produced by Timbaland, so it is not surprising that it is more hip-hop and r & b style, although Nelly herself describes it as "punk-hop". To date, this is the singer's most successful album, which was at the top of the charts in the United States, Canada and several other countries. On September 15, 2009, Nelly released her first fully Spanish-language album, Mi Plan; 2010 is also planned for the release of the English-language album Lifestyle, which is again produced by Timbaland.

03:48
All Good Things (Come To An End)
Всё хорошее заканчивается