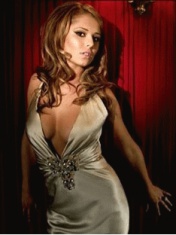 
Cheryl grew up in a poor English family. Her parents did not marry and ended their life together when Cheryl was 11. Despite financial and family difficulties, the girl did not lose heart - from childhood she was interested in dancing, at the age of 9 she entered a ballet school, and also starred in commercials and participated in youth beauty pageants, often winning them - for example, she was chosen "the most attractive girl in Newcastle."

In 2002, the "girl" pop group Girls Aloud was formed by audience voting, one of the five members of which was Cheryl. The group enjoyed some popularity, but in 2009 took a sabbatical. From that moment, Cheryl began work on solo material, and in October 2009 her first album, "3 Words", was released. Sherrill was actively involved in the work on the album with will.i.am, a member of The Black Eyed Peas.

Also in 2009, Cheryl acted as an opening act for the Black Eyed Peas during their European tour. In early 2010, it became known that Cheryl broke off an already fragile relationship with her husband Ashley Cole and, impressed by these events, disappeared from the press in Los Angeles, where she recorded the musical material for the new album, release which is expected at the end of 2010.
Смотреть все