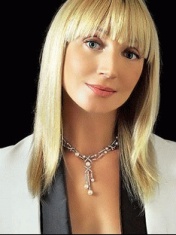 
Kristina Orbakaite had to make a lot of effort so that her biographical information did not begin with the information that she was the daughter of Alla Pugacheva. And here again ... And nevertheless, despite her mother's strong genes and Pugachev's intonations in the interview, Christina partially managed to become the opposite of Alla Borisovna on the stage. Pugacheva became the main singer of the country, choosing a “habalist” image close to the people - Orbakaite turned out to be almost the most stylish pop singer, even serving comic songs with “proprietary” Baltic restraint.

Christina was born on May 25, 1971 in the short marriage of Alla Pugacheva and Mykolas Orbakas, a circus artist from Lithuania. She spent her childhood in her father's homeland - my mother just fought for nationwide popularity. When the superstar status of ABP became unquestionable, a little fame went to the daughter, who was shown to the whole country in the program "Song-83". Soon Christina starred in the leading role in Rolan Bykov's film "Scarecrow", and the common talk about "thieves children" as applied to her subsided - 12-year-old Orbakaite coped with the tragic role brilliantly.

Then Christina achieved great success in the dance field, and when it seemed that her career would be very different from her mother's, she finally sang. At least once every two years, Orbakaite releases new albums, each of which is not complete without hits: clips are carefully shot on them, mostly interesting. In parallel, she acted in films (the filmography includes more than ten films, including "Limit" and three parts of "Lyubov-Carrots") and graduated from the Russian Academy of Theater Arts.

Active creative activity does not interfere with personal: Christina has two children (from civil marriages with singer Vladimir Presnyakov Jr. and businessman Ruslan Baysarov). She is now married to American businessman Mikhail Zemtsov. In the fall of 2009, there was a loud scandal between Orbakaite and Baysarov, who could not decide with whom their common son Denis should live. After a prolonged public hassle, the parties came to a settlement agreement, the details of which were never communicated to the public, who closely followed the vicissitudes of the battle.