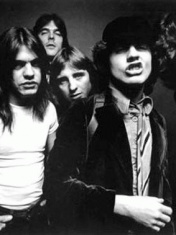 AC / DC is a legendary Australian band that combines blues, rock and roll and the energy of hard rock in their music. It was formed at the end of 1973 in Sydney by the brothers Angus and Malcolm Young, and after a while they were joined by the explosive Bon Scott. The abbreviated name "AC / DC" in English means direct and alternating current, and in Australian usage it contains a hint of bisexuality. Extravagant behavior on and off the stage, bold and rude lyrics and, finally, bright and strong live performances have become the components of AC / DC's success with rock fans in Britain.
The name of the group was invented by the mother of the Young brothers, noticing this abbreviation on her household appliances. The first line-up, in addition to Malcolm and his brother Angus Young (ex-TANTRUM), also included vocalist Dave Evans, bassist Larry Van Knedt and drummer Colin Burgess. AC / DC gave their first performance on December 31, 1973, two weeks after their formation. At first, not everyone liked the image of the musicians who acted on the verge of a foul, so in some places they were forbidden to perform.
The first major success for the band came after the release of the composition "It's A Long Way To The Top". The band managed to gain attention and soon signed to Atlantic Records, followed by a UK and European tour.
Produced by Mutt Lange, 1979's Highway to Hell took the band to the top of the world's rock charts of all time. The album undoubtedly became the most popular of the group's discography at the time of its release. Many of the songs on this album can still be heard frequently on
radio, and the title track became one of the most famous songs in the history of rock music.
Shortly after the death of vocalist Bon Scott in February 1980, the group acquired a new frontman Brian Jones and released the album "Back in Black", which became the best-selling album in the group's discography.
The next album, For Those About to Rock (We Salute You), released in 1981, also sold very well and was well received by critics. The composition of the same name, ending under the thunder of scorching guns, became the culminating and final number of most of the subsequent concerts of AC / DC.
The 1983 album Flick of the Switch, which the band produced without Lang, received a pretty cool reception from the public. In 1985, with the new line-up, the group recorded the album Fly on the Wall, which sold even worse than its predecessor.
In 1986, AC / DC returned to the charts with the title track of Who Made Who, the soundtrack for Stephen King's Maximum Overdrive, and was inducted into the Australian Recording Industry Association's Hall of Fame. However, then it was already
it is obvious that a serious creative crisis is coming in the group - the press began to write about this and to get rid of such criticism, AC / DC did the only right way - in 1988 they released an amazing album "Blow Up Your Video" with a mega-hit, single " Heatseeker ".
In 1990, "The Razor's Edge" became one of the most successful albums of their late career, hitting
the British Top 20 with "Thunderstruck" and peaking at No. 2 on the US charts.
In 1994, Phil Rudd returned to the group. With him were recorded the albums "Ballbreaker" (1995) and "Stiff Upper Lip" (2000).
In March 2003, AC / DC was inducted into the Rock and Roll Hall of Fame in New York.
This was followed by a long pause, but in 2008 AC / DC decided to please their fans and made a new studio disc "Black Ice". The album "Iron Man 2" was released two years later. It features some of the most exciting compositions of the legendary band: Shoot To Thrill, Back In Black and many others.
Throughout its existence, AC / DC have sold over 150 million copies of albums from their discography around the world, including about 70 million in America. Their most successful album, "Back in Black", ACDC has sold over 22 million in the United States.