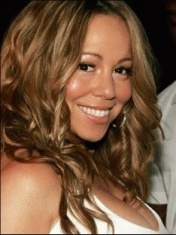 
It seems that this girl with seductive forms recently appeared on the stage - and after all, Mariah Carey was born on March 27, 1970, and will soon celebrate a serious anniversary! It is not known how the career of a young waitress would have developed if her demo tape had not been received by the president of Sony Music Tommy Mottola (who soon became the singer's husband), but being a very punchy, persistent and talented girl, Mariah very quickly staked out a place in the sun with her debut super successful the album "Mariah Carey" (1990). Subsequent creations of the soul diva no longer needed special advertising, for they were scattered in millions of copies.

In 1991, Carey received her first Grammy in two nominations at once: "Best New Artist" and "Best Pop Vocalist". Further, from the album "Music Box" (1993) to "Daydream" (1995), her creative-production tandem with Mottola consistently brought the singer places in the ratings and awards. And as soon as the marriage fell apart, the next album "Butterfly" (1996) was expecting a much more modest success.

In 1999, Carey realized her acting ambitions, starring in the film "The Bachelor" (The Bachelor). In the same year, she released her next studio album, Rainbow.

2001 was the singer's first failure: Mariah parted ways with the Sony label and began a new streak of experiments. Having released an "experimental", full of rap and r'n'b, album "Glitter" in early November, Maraya decided that she had a whole box of hits, and again gave birth to a collection of her own compositions, but its sales did not go as well as she wanted would.

It became obvious that it was time to remove rap and experiments from the albums - and the tenth studio album "The Emancipation Of Mimi" (2005) became just that, beautiful in its tradition. And it paid dividends: Billboard loves her again! April 1, 2008 joker Mariah released the album "E = Mc2" (the name of which is not borrowed from Einstein, but from friends-philosophers).

But most importantly, with her new work, Mariah Carey broke Elvis Presley's record: the song "Touch My Body" from the album "E = MC2" became the 18th hit in the entire history of Carey's career, which took 1st place on the Billboard charts. Elvis had 17 such hits. The Beatles have 20.