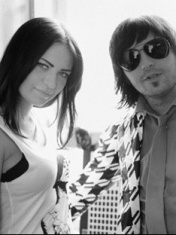 Gorchitza is a musical duet in the popular “girl and programmer” format, which became popular with lightning speed first in Ukraine, and later in Europe. For listeners who prefer quality in music, it attracts with the current European sound and bright English-speaking vocals.

The project was created by the talented arranger and composer Alexei Gorchitza (Crimea, Kerch) and the vocalist Allois from Kiev.

In August, the group performed for the first time in front of the Russian public at the Lounge Fest with a 50-minute program, preceding the performance of Morcheeba's lead singer, Sky Edwards. Despite the fact that usually "warming up" compositions are most often perceived by the public negatively and barely carry their feet off the stage, dodging beer glasses and rotten tomatoes, Gorchitza was greeted by the people very well. Many people note that this stylish, timely project with high-quality fresh sound and strong lyrics from the first notes managed to create a sense of quality work in the audience. this opinion was supported by the concept videos of the group “Call It A Dream” and “Final Cut”, which soon appeared on the air of Russian music channels.

The band members themselves consider their successes to be the first steps on the golden ladder to the charts, and are currently working on their second album.