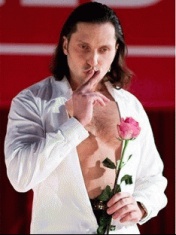 Arthur Pirozhkov is the stage name of showman and actor Alexander Revva.

Arthur Pirozhkov positions himself as the sexiest singer on the national stage and generally the sexiest man on the planet. I came to Moscow from the provinces. Became famous for the song "Paradise", which he first performed on the stage of "Comedy club". The song was later recorded and a music video was also released.

Together with his friend Andrey Rozhkov, he hosted the program "You are funny!"

In 2010, together with the Quest Pistols group, he released the song "Revolution". The duo also recorded a video for this song.

At the MUZ-TV 2011 Prize Pirozhkov won in the Breakthrough of the Year nomination, leaving behind his competitors: Gorchitza, Marseille, Sleeping Cowards and Mitya Fomin.