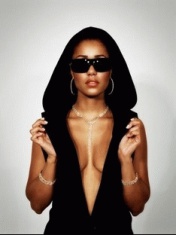 Ida Korr is interesting, firstly, because she is Danish - musicians from this country rarely achieve European, and even more so, world fame. The last big Danish project was Aqua, which played ultra-commercial bubble gum pop. But Ida's music is much closer to the underground electronic scene: despite the catchy vocal melodies with a clear touch of soul and R&B, the basis of Corr's songs is rather hard and rhythmic electro. Do not forget that Ida herself takes part in writing her songs and working on the sound of her albums. This alone suggests that such music will not fit into the framework of established pop production templates.

Many people think that the name "Ida Korr" is an anagram of the word "bullfight". But that is the real name of the young African American. Ida Korr was born on March 14, 1977 in the Danish city of Erhus. At the age of 11, she won her first children's song contest, and, barely reaching the age of majority, began performing as a backing vocalist in the groups of many famous Danish performers. The next step in her career was the participation in the girl group Sha Li Mar, which even released one album.

However, the band did not last long, and with the release of their first solo album, Streetdiva, in 2005, Ida Korr gained real fame. In 2006, her second album was released, and the singer's popularity began to grow outside her native Denmark. The track "Mirror 07 07 07", recorded together with the world famous Dutch DJ Fedde Le Grand, played an important role in this. The song is famous for being first performed at a special Live Earth concert, at exactly 7 hours 7 minutes on the 7th day of the 7th month of 2007. The second collaboration with Le Grand - the single "Let Me Think About It" - strengthened Ida Corr's position in Europe, and the compilation "One", composed of songs from the first two albums, was released in the USA.

In 2009, the artist released a new album "Under The Sun". On it, Ida continues to experiment and collaborate with various curious characters. So, the Jamaican singer Shaggy became the guest star on the single "Under The Sun".

03:04
Клип Ida Corr - What Comes Around Goes Around

1
Let Me Think About It
Comments