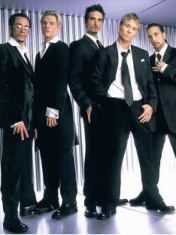 
The American group Backstreet Boys was formed by the entrepreneurial impresario Lou Perlman, who was inspired by the success of New Kids On The Block in the late eighties. For the selection of musicians, Lou organized a large-scale competition with a budget of three and a half million dollars, and invited Johnny and Donna Wright (Jonny Wright, Donna Wright), who previously worked with NKOTB, to play the role of group managers. The first Backstreet Boys album was released in 1996 and became successful in Europe and Canada, but went unnoticed in the homeland of the group in the USA. The breakthrough was the singles "Quit Playing Games With My Heart" (# 2 on the Billboard 100 chart) and "Everybody" (# 4), after which the disc reissued in America finally became a bestseller: at number four on the national chart and 14 total million copies sold. Most of the money earned, of course, went to the cunning manager, and in 1997 the group was already in full lawsuit with Pearlman. At this moment, the Backstreet Boys were approaching the peak of fame, the third album titled "Millennium" became the most successful in their career - its circulation exceeded forty million.

In 2002, the group decided to terminate the contract with the management company The Film (Nick Carter, on the contrary, preferred to start a solo career under the patronage of The Film), and also entered into a lawsuit with the record company Zomba. According to the musicians, with the money collected from the Backstreet Boys albums, the label was not promoting the band's new discs, but Nick Carter's solo album. The litigation resulted in a new contract on more favorable terms for the group. Later, A.J. McLean began to have problems with alcohol and drugs, as a result, the group went into oblivion for three years. The first single after the band's reunion in 2005 was "Incomplete", after which the group released the album "Never Gone", which sold over 10 million copies. However, things went from bad to worse. Kevin Richardson left the band, and the four-piece album "Unbreakable" rose only to 7th in the United States. This time the group's management focused its promotional efforts on the Asian market, and it was not wrong. In Japan, the record climbed to the top of the charts. On the seventh studio long-play "This Is Us", the band decided to keep up with the times and move towards R&B. T-Pain, Ryan Tedder of One Republic, and producer RedOne, who arranged arrangements for the single "Straight Through My Heart", were hired to record the CD.

03:48
Shape Of My Heart
Открытое сердце

03:56
More Than That
Любить тебя больше

01:00
This Is Us Photo Shoot Sizzle Clip