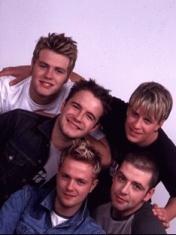 At first, Westlife was apparently conceived as the main competitor of another Irish boy band - Boyzone. The team got off to a good start, and the path to the top was very short: the collapse of Boyzone in 2000 turned Westlife into monopolies. Out of work Boyzone manager Louis Walsh took Westlife under his wing and the band took over exactly the same place where Boyzone had been on the market. Indeed, it is quite difficult to distinguish groups from each other.

Both groups started out as brisk, danceable teen-pop and eventually ended up with ballad-oriented, laid back soft rock. Their music is characterized by the calm sounds of acoustic guitar, thoughtful arrangements with strings, many vocal harmonies, sleek pop melodies and sensual voices singing about exquisite love. Some might say that the two Boyzone lead vocalists are more charismatic and recognizable than Westlife vocalists, but that's a matter of taste. In 2007, Boyzone reunited, so now fans of the genre have two favorite bands at once, which release twice as much good music.

The Westlife ensemble was formed by manager Simon Cowell on July 3, 1998. The original line-up included another member, Brian McFadden, who left the band in 2002. It was decided not to look for a replacement for him.

Westlife is the only band in British musical history to have their first seven singles hitting # 1 on the charts. The band members are among the top 20 richest Irish people. The jubilee concert dedicated to the 10th anniversary of the group was attended by 83,000 people. Westlife will be on tour throughout 2010, after which they will begin recording their new album. This tells us that boy bands don't have to share the fate of Take That, the Backstreet Boys and N'Sync, which were falling apart at the height of their popularity as the soloists grew older and began to show personal ambition. Westlife's example shows that there is another way: a band can maintain a line-up, evolve musically, and continue to be successful in unrelenting demand.
Смотреть все

04:01
Seasons In The Sun
Счастливое время*

03:56
Us Against the World
Мы против всего мира

04:00
You Raise Me Up
Ты даешь мне силы подняться