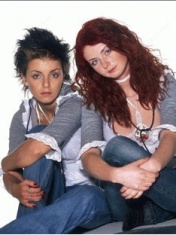 
The only Russian pop group that has achieved real and undeniable success in the West. The duet of the ex-members of the Fidgets group, Yulia Volkova and Lena Katina, was created in 1999 by producer Ivan Shapovalov, who previously worked as a child psychiatrist and screenwriter for commercials. The group instantly declared itself with the provocative video "I'm out of my mind": the producer invented the image of young lesbians for the soloists and supported it with the help of scandalous songs, videos and just utter antics. The image provocation was supported by unexpectedly mature music - songs, during 2000-2001. which became hits in Russia, when translated into English turned out to be no less in demand in the western market.

In 2002-2003, Tatu, renamed tATu abroad, listened to all of England, Japan, and most of Europe. However, at the 2003 Eurovision Song Contest, the duo, which, under pain of disqualification, did not stage any lesbian performances, took only third place: the UK mysteriously adoring girls did not give the group a single point.

Since 2004, the duo's career began to decline - the girls grew up and acquired novels, their “non-standard orientation” ceased to be a sensation. At the peak of Western success, producer Shapovalov, inexhaustible on inventions, made several international scandals related to the cancellation of concerts and actions under far-fetched pretexts. The group was going to record the second album in reality show mode, but the soloists did not appear in the studio, breaking off relations with Shapovalov. Contrary to forecasts, the duo did not break up after that, but suspended their activities due to the pregnancy of Yulia Volkova.

In subsequent years, the group, which had already abandoned the lesbian image, but did not come up with any replacement for it, nevertheless released two more albums, which were greatly inferior in popularity to their debut, and Volkova gave birth to a second child. In 2009 it was announced that the soloists were beginning to work on solo projects, although this does not mean the final collapse of Tatu.

1
Not Gonna Get Us

All The Things She Said