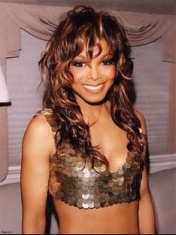 
Janet Jackson is the famous younger sister of Michael Jackson. The singer was born on May 16, 1966 in Gary, Indiana. For the first time on stage, America saw a touching girl in 1977, when Baby Jen flashed in TV shows and danced dashingly on TV shows with her older brothers, who were already Jackson 5 - a phenomenon of American musical culture. Father and manager Joseph Jackson decided to start her musical career, not particularly interested in his daughter's opinion on this matter. The first two albums "Janet Jackson" and "Dream Street", recorded on A&M Records with the active participation and leadership of her family, turned out to be weak, critics greeted them coldly, and the public almost did not notice. Janet was accused of lack of talent and trying to leave at the expense of her last name.

Therefore, after the release of "Dream Street" Janet completely refuses to work with relatives and goes to Jimmy Jam and Terry Lewis. The talented Funk / R&B producers have given Janet the right direction while giving her the freedom to express herself. In 1986, Janet released an album with the self-explanatory name "Control", which brought the girl the long-awaited success. A mixture of soul, funk, jazz, rhythm and blues - the album sounded fresh and had no analogues in the show business of that time. The singer's video clips attract particular attention with their staging and first-class choreography. In 1989, Janet released the album "Rhythm Nation" with a bright social connotation. It differs significantly from "Control", but retains the specified style, adding rap, swing and blues elements to it. It is from this album that Janet begins to tie all the material into a single canvas, stitching it together with short interludes inserted between songs. Seven songs from the album made it to the top five of the Billboard Hot 100. Even older brother Michael Jackson could not do that. "Rhythm Nation" was named one of the 500 Greatest Albums of All Time by Rolling Stone magazine. Janet's first tour is recognized as the best debut tour in the history of music.

In 1991, Janet signed a contract with Virgin Records, which brought about a radical change in her image. The singer turns into a mature performer, completely abandoning the "youthful" repertoire and style. In 1993 she released the album "Janet." ("Janet and period"). Having refused the surname on the cover, Janet reminds that she achieved her success herself. Hip-hop, rock, ethnic elements appear on the album, and even opera is heard in "This time". "janet." - a soft, sensual and adult disc, which somewhat shocked the listeners with its sexuality. Then Janet starred in a movie called "Poetic Justice" with Tupac Shakur for the first time. The debut was criticized, but for the soundtrack to the film entitled "Again", Janet received an Academy Award and Golden Globe nomination.

In 1997, the album "The Velvet Rope" was released, which Janet recorded for a long time and being in deep depression. A gloomy, but brilliant work, highly appreciated by critics and listeners, full of reflections, personal experiences and spiritual searches. And in 2001 she published the album "All For You". Despite the fact that Janet was going through hard times, the disc turned out to be quite light, light and danceable - when listening to it, it is obvious that Janet is seriously interested in R&B. Commercially, the album was incredibly successful, but there was a perception that Janet was losing her uniqueness, trying to compete with the new generation of R&B artists.

In 2004, during a performance with Justin Timberlake at the Super Bowl, the infamous "wardrobe malfunction" occurs: the singer suddenly appeared in front of fans with a naked bust. Without realizing whether this trick was planned, the public was extremely outraged by it. On Janet's career, a fat end was almost put. Several radio stations completely removed her repertoire from their airwaves, there were many conflicts, including with the organizers of the Grammy. Many fans still have not forgiven Janet for this oversight.

In the next albums "Damita Jo" and "20 YO" Janet completely goes into R&B. Both albums received Grammy nominations for Best Contemporary R&B Album. Both works are of high quality and sold well, but they did not cause enthusiasm. "Damita Jo" was considered boring, vulgar and rather weak for a star of this status, and "20 YO", which became a kind of curtsy to Janet's entire career, did not show, in the end, anything new and fresh. In need of change, the singer goes to Def Jam Records and changes the production team. She does not take part in the creation of songs, although on previous records she was always the co-author of most of the songs. The result of the work was the disc "Discipline", released in 2008, which turned out to be rather calm and surprisingly not too danceable. He did not become a triumphant return, but he turned out to be much better than the two previous albums, which delighted the fans.

In 2009 the collection "Number Ones" was released, which became a kind of summing up. On it there is a new song "Make me", which has already become a hit, and compositions that took the first places on the charts in Janet's entire career. In 2010 the fourth film "Why Did I get Married Too?" with the participation of the singer, in which she increasingly reveals her acting talent. In addition, Janet is working on a new album and writing a book.

Janet Jackson lives in New York. She is actively involved in charity work. The singer says little about her personal life, but all her experiences and life stages can be easily traced through her work, in which she is always extremely frank and sincere. Behind him are two marriages, the first of which lasted only a year due to her husband's bad habits, the second - nine years, and he was carefully hidden. While working on the "All For You" disc, Janet starts dating her producer Jermain Dupree, with whom the relationship continues to this day. From time to time, rumors appear in the press about a spat, then about an upcoming wedding. The singer has no children.
Смотреть все