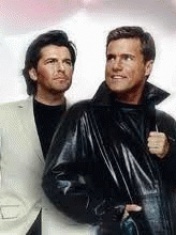 "Modern Talking" is a German English-speaking musical duo, performing dance music in the Eurodisco style, consisting of Thomas Anders and Dieter Bohlen. At the end of their existence, the duo developed into the most commercially successful German pop formation. In the second half of the 1980s, the group "Modern Talking" was one of the most popular in the world. The duo made a great contribution to the development of European and, in part, Asian music.

The duo's stellar history began with the hit song "You're My Heart, You're My Soul", released in September 1984. In March 1985 "Modern Talking" recorded the next hit - "You Can Win, If You Want", and a little later the first album "The First Album" was released, in which Thomas Anders performed the main vocals.

The album was a huge success. In October 1985, the duo pleases fans with another hit - "Cheri, Cheri Lady" from the second album "Let's Talk About Love". The new disc in the first two weeks is sold in Germany with a circulation of over 186 thousand copies. After releasing in 1986 an album called "Ready For Romance", which featured hits such as "Brother Louie" and "Atlantis Is Calling", they still hit the English and Canadian charts. No less popular was the musicians' next album, In The Middle Of Nowhere, with the songs Geronimo's Cadillac and Give Me Peace On Earth.

The group existed for another year, before the contract expired, released two more albums ("Romantic Warriors" and "In The Garden Of Venus") and in 1987 disbanded by mutual consent of the members.

"Modern Talking" triumphantly returned to the pop scene in the spring of 1998, once again joining forces and releasing the album "Back For Good", which consisted of dance remixes of old songs with the addition of four new songs: "I Will Follow You", "Don ' t Play With My Heart ”,“ We Take The Chance ”,“ Anything is Possible ”. The final album was No.1 Hit Medley, which was composed of popular songs from the duo. The album was certified four times platinum in Germany and surpassed platinum in several other European countries.

From 1999 to 2003, the duo released five new albums, three of which also went platinum. Only the style of light modern dance music remained unchanged. Some of the compositions were recorded with the participation of rapper (African American) Eric Singleton, thanks to which the duo hoped to win over the American audience. On June 23, 2003, the band's last album, "The Final Album", was released, which included 20 of the best songs of the duo, recorded over 19 years of its existence, and on November 10, the eponymous DVD with a similar tracklist was released.