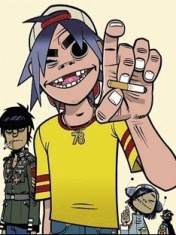 The Gorillaz Project proudly bears the title of the world's first virtual music group. The restless Damon Albarn is responsible for the musical component of Gorillas, and the visual image is taken over by the artist Jamie Hewlett, the creator of the Tank Girl comic. There are four characters in the virtual band: vocalist and keyboardist 2D, bassist Murdoc, drummer Russel Hobbs and a singing guitarist nicknamed Noodle. Everyone has not only a visual image, but also a detailed biography, in general, the whole story is thought out with the thoroughness of good fantasy. The Gorillaz were shown to the public exclusively from the screens - in clips, in DVDs, which were published on a par with albums and singles, and even at rare concerts, which the group usually gave on the occasion of the presentation of some regular prize.

In reality, Albarn made the Gorillaz a variable formation. Damon attracted different musicians to the recording, and did not limit himself too much in style, hanging out between hip-hop and rock. The debut album was produced by Japanese Dan "The Automator" Nakamura, Noodles' voice was voiced by Miho Hatori and Tina Weymouth, and even Ibrahim Ferrer from Buena Vista Social Club. Californian rapper Del tha Funkee Homosapien helped "Gorillas" on the single "Clint Eastwood", which became the hallmark of the group. The album "Demon Days" has turned into a collection of stars at all: producer Danger Mouse, De La Soul, Neneh Cherry, MF Doom, London gospel choir and even Happy Mondays vocalist Shaun Ryder, whose voice sounded in the song "Dare". Things got to the point that on their website the group arranged something like a contest “Hello! We are looking for talents. " The popularity of Gorillaz reached the point that the group seriously discussed the possibility of a world tour using holographic technologies, but after calculating the cost, it was decided not to tour.