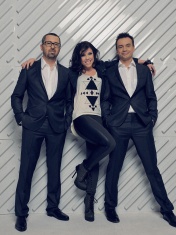 Group Disco Avaria was born in the "city of brides" Ivanovo. The team specializes in dance music with humorous lyrics. The founders of the group are Nikolay Timofeev and Alexey Ryzhov. Their creative career began with the organization of discos in clubs. After a while, the club "Avaria" was created, which later served as the source of the name. For several years, the cheerful duo hosted a program called "Disco Crash" on the radio "Europe plus Ivanovo". The program was devoted to the review of musical novelties. After that, former actor Oleg Zhukov joined Timofeev and Ryzhov, and then the fourth participant, Alexei Serov.

The group released their first album in 1997. Already in 1999 the songs "Disco Crash" were included in the collections "Soyuz". The group is becoming popular outside of its hometown.

On February 9, 2002, after a long illness, one of the group members, Oleg Zhukov, died. In a truncated line-up, the group released a maxi-single “H. Kh. Kh. I. RNR ", followed by the single" Sky "; both songs reached the top of the charts. Video clips were shot for these songs, as well as for the songs "Severe Rap" and "If You Want to Stay". This was followed by a series of awards and prizes: in 2002 the group became the winner in the Best Russian Act nomination (Best Russian performer) at the MTV Europe Music Awards 2002 in Barcelona, the video "Nebo" was named the best video of 2004 by Muz-TV channel. Disco Crash is a multiple winner of the Golden Gramophone Award, the Song of the Year diplomas, awards from the MTV and MUZ-TV music channels. In 2005 "Disco Crash" was named the Best Group by MTV Russia (RMA).

In 2012, there were changes in the group. After 22 years of joint work, Nikolai Timofeev left the team, making a choice in favor of solo creativity.

Instead of the ex-soloist Nikolai Timofeev, the "emergency workers" took Anna Khokhlova, a participant in the X-Factor-3 show, into the composition.