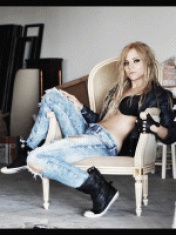 The singer Stacy began her creative activity in 2008 and during this time has won the hearts of many European and Russian listeners. In the same year, the singer released her first album in English. It was created by Jaakko Salovaara, a member of the famous Bomfunk MC's group. The tracks from this album immediately won the hearts of young people, both in the artist's homeland and in other countries.

In 2009, the songs "Vinegar" and "Awol" entered the UK charts under the patronage of Sony BMG.

In 2010 the song “It still you” became the soundtrack for the Swedish TV series. In the same year, together with Sony BMG, Stacy released the album POP. After the release of the album, the singer went on a tour of Scandinavia. The Scandinavian and Baltic tours included such cities as Oslo, Helsinki, Stockholm, Tallinn, Riga, Vilnius.

In 2010, the singer became a laureate of the New Wave International Competition for Young Popular Music Performers, where she represented Finland, the country in which she lived and worked at that time. Later, the singer moved to Moscow, where she continued her creative development. Also in 2010, Stacy received the Most Stylish Artist of the Year award at the 2010 OE Video Music Awards, where she was presented in four categories.

At the end of April 2011, the premiere of the song "Why - Magistral" took place - a unique creative union with the world famous Swedish singer Pandora. In the summer of 2011, a video clip for this song was released, and in the fall the English version of the song was presented to the public.

In 2012, the first completely Russian-language song was released, written in tandem with the famous author Lena Stuf Drobysh "I don't want war." The video for this song entered the rotation of many music TV channels. The song won the OE Video Music Awards 2012, which took place on April 27, 2013 in Kiev.

In the fall of 2012, a presentation of the singer's new video for the song "I'm running away" took place.

In March 2013, the singer received a statuette as "The Best Baltic Artist". Also in 2013, the artist began cooperation with the Russian label "Shoomroom", the founders of which are the soloists of the popular group "5sta Family" Valery Efremov and Vasily Kosinsky. Together they create the track "Time", recorded in a duet with Coolb (Valery Efremov), which is currently in rotation on the leading music TV channels of the CIS countries.

In February 2015, Stacy performed in the Party Zone program on the MUZ-TV channel.