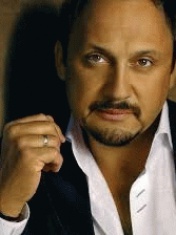 Stas Mikhailov was born on April 27, 1969 in Sochi. Stas's father was a pilot, his brother chose the same profession. And in the biography of Stas Mikhailov, from childhood, a penchant for creativity was manifested. During his school years, he already wrote poetry and songs, participated in all kinds of competitions. And when he graduated from school, he entered to study at the Minsk Aviation School. But this profession, although it was a family tradition, was not Stas's vocation. He dropped out of school, went to serve in the army. After completing the service, he entered the State Institute of Culture of Tambov. However, this institute also did not graduate. In 1992, Stas Mikhailov moved to Moscow in his biography. There he almost immediately began to work in the variety theater, Boris Brunov was its leader. All this time Mikhailov did not stop writing songs.
In 1997, Stas Mikhailov's first album, Candle, was released. The song of the same name became a real hit and quickly gained popularity. But the rest of the songs on the album were not noticed. The album was released in St. Petersburg, so that soon Mikhailov became famous in this city, although he returned to his homeland - in Sochi.
The second album in Mikhailov's biography was released in 2002, but also did not have a resounding success. Only after the third album "Calling for Love" did Mikhailov become truly famous. Videos for some songs were shot, and Stas himself began an active concert activity. The next album "I'm Coming to You" was released in 2005, and in 2006 the album "Dream Shores" was released.